Roundup of a busy week 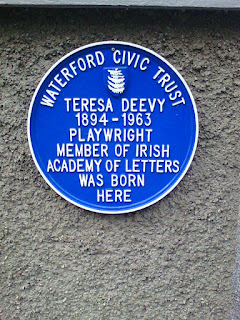 I have to admit that the name Teresa Deevy was unfamiliar to me although I was aware that a blue plaque had been unveiled in recent years and that she was a playwright from Waterford. Dayna KIlian's notes made interesting reading. Born in 1894 in Waterford, the youngest of thirteen children, Her writing was much encouraged at home and at school and she was a college girl, switching from UCD to UCC when she became deaf. She moved to London and quite extraordinarily she taught herself to lipread by genning up on scripts and watching them on stage. She wrote prolifically for the Abbey until she fell out of favour with a new board under Ernest Blythe. An extraordinary life story. The notes tell us that Sean Dunne, the Waterford poet  made an effort to locate a copy of the script by placing an ad in the Irish Times in 1984. The play had not been published and no copy could be found. Eventually a copy was found in the family home  The play was published in 1995 and a production ran at the Mint Theatre in New York that specializes in mounting productions of neglected scripts.

The  eight strong cast gave a good account of it and and the 1930's period was nicely evoked in Blanaid McCann's costumes.
In Tully's Bar (great to have this watering hole back in business for post show discussions) I met Bill Deevy gand nephew of Teresa Deevy who spoke of his father being charged with his aunt's archive which was kept at the family home until being donated to Maynooth Library where it remains accessible for students to consult.  Further evidence of Waterford's strong literary tradition.

Live Screening /Tales of Hoffmann:  came live from the Royal Opera House. I saw it in the Omniplex in Waterford  which was very comfortable with good surround sound effects. The production was a revival of a smashing production by John Slessinger, the film director. Particularly enjoyed Christine Rice as Guilietta

Choral Concert Chamber Choir Ireland came to St Patrick's Gateway with a programme of mostly Bach. There event fell short of expectation for a number of reasons.
I missed the opening remarks and the rest of the hour long programme was presented with no note of context either spoken or in the printed programme which did have the full texts. I felt the sound of the violone and organ sounded very rich and pleasant in the acoustic of the small scale church. and it would have been nice to hear a solo item from Mr Earley .
Feedback suggested that the programme was a bit on the short side. Not for me I am quite happy with one good   hour of anything.  However, I do like to have a little chat with the performers after the show. What a shame that despite the early finish at 8.45pm or so, members of the choir beat a hasty retreat back to Dublin. 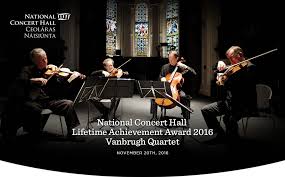 It was bitterly cold as I  made a round trip to Dublin for an event at NCH at which  the Vanbrugh Quartet were presented with a Lifetime Achievement Award. For the evening they had assembled some friends to play some favorite repertoire.  There was splendid Brahms with Michael Collins. Hugh Tinney made light of the tricky Schubert Trout variations.  Chi-chi Nwanoku looking fabulous in bright red top spoke movingly about coming to play in the home of her Irish mother after fifty years of living in the UK.   Charlie Flanagan, Minister for Foreign Affairs did the honours and struck just the right night of humour and gravitas in bestowing the awards. You can read my preview piece for The Irish Examiner here.  http://www.irishexaminer.com/lifestyle/artsfilmtv/the-vanbrugh-quartet-are-adding-another-string-to-their-bow-431089.html

Cormac Keveney is a fine  jazz singer. I heard him for the first time on Thursday at JJ Smyth's in Aungier Street. Accompanied by Damien Evans on bass, Johnny Taylor on piano and Dominic Mullan on drums. Keveney has an understated platform presence and the mood was easy and mellow in an eclectic set. I liked his version of Paul Simon's Train in the Distance. I enjoyed chatting to bassist Damien Evans who hails from Australia. We aklso met Chris Keveney, Cormac's proud dad who is himself a jazz musician. You can catch him playing at the Kilkenny Shop on Sunday mornings.  Check him out for yourself here

I was somewhat taken aback to hear that the venue is apparently close to changing hands and it seems that jazz may move to an alternative venue in future. We always get a cheerful greeting from Spanner the doorman who has presided over the upper room at JJ's for as long as I can remember .

RIP Billy McCarthy. Billly
Like everyone in Waterford, I was shocked at the untimely passing of WLR broadcaster Billy McCarthy. I never met him but I did go along to see him in action at a live broadcast and I recorded this note on this blogpost.
http://cathydesmond.blogspot.ie/2011/09/bluegrass-broadcasts-and-ballyporeen.html

"
Can it really be 17 years since the Bluegrass Festival weekend was inaugurated in Dunmore East. In honour of the occasion, WLR stalwart Billy McCarthy conducted his morning radio show from Azurro Restaurant in the South Eastern fishing village. Having connections here , I listened with keener interest than usual to this mid morning broadcast and indeed went along to watch the final segment of the programme being recorded . Producer Jennifer Long assembled a delightfully diverse range of genuinely local voices to broadcast on the ether on a gloriously sunny morning. Many of them familiar, they included local restauranteurs, a publican, Tidy Town folk, a lifeboat man, local history experts, singers, bluegrass musicians , divas and sailors and a celebrity chef. McCarthy's easy and understated interviewing style concealed what a consummate performer he is. It was a refreshing change to have a morning show presenter who does not use guests as a foil for his own witticisms . McCarthy knew many of his guests which added a depth to his dialogues but he drew interesting information from all his relaxed interviewees."

Posted by Cathy Desmond at 6:47 PM