Over The Bar At Flannery's Limerick

Jerry Flannery was a rugby hooker for Munster and Ireland who had a bit of a cult following. His flowing locks and aggressive ball carrying  endeared him to fans of the traditional Munster / Limerick 'ball up the jumper' style of play.

The Flannery name is otherwise synonymous in Limerick with several pubs of that name  and it was in  one of them Jerry Flannery's bar we saw the renowned local band the Jackie Chan Allstars. A band with a name like that has to be checked out.

The band was placed on a stage above the bar in what could loosely be termed a beer garden given it was December in Ireland. The crowd was a combination of Friday night drinkers, office Christmas party revellers and an advance party of Saracens supporters who probably didn't really know what was in store for them in the white heat of a Heineken match the next day in Thomond Park. 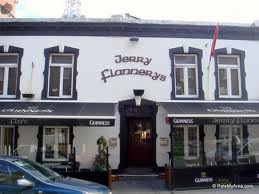 It was a bit surreal to order your drink with a rock band over your head. The set list was an eclectic mix of covers; Abba, the Killers, Johny Cash etc etc. The band consisted of 2 guitarists, keyboards, and drummer.
The stage was high so everybody got a good view even if it did result in a bit of a crick in the neck the following morning.
They rocked the place. Look out for them they're good.