The Last Summer by Declan Hughes at the Gate Theatre

By guest blogger John Hartery
The Gate Theatre in Dublin premieres a new work by Declan Hughes, The Last Summer,  as part of the Dublin Theatre Festival this week. The play tells the story of a group of teenagers over a summer day in 1977 and how their life evolved as seen 30 years later. What would have happened if they had chosen a different life?

The teenagers storyline is set in 1977 the infamous year that links Elvis and the Sex Pistols. Hughes chooses to anchor the plot with links to the cult Canadian  rock band Rush and the writer  / philospher Ayn Rand.  I'm not too sure that many in Gate audience were too  familiar with their works .There is a rock band about to perform in public for the first time with some Rush  covers and talk of getting the points for college &  moving away and a struggle with what Charlie Haughey solved with  an Irish solution to an Irish problem. (I don't recall university points being a thing in that era).

The play is directed by Toby Frow with a quite minimalist set by Robert Innes Hopkins. The action  is backed up by a soundtrack of pop music from the period and leaps forward and back.

The modern storyline concerns the returned emigrant who has come back to revive an intermittent lost  love. There is a reunion over a pub crawl. We get  a nod to modern Ireland with talk of 'fundamentals of the economy' and a property developer character.

The play is set in South Dublin in the general Dun Laoghaire  area. I felt that the play seemed overly focussed on that region with name checks of the pubs, nightclubs,  a named deli etc with little if any connection in any sense to the wider Ireland. I struggled to generate empathy with any of the characters and their insular world. Gary Lydon as Tom Groves and Clare O'Malley, who played two parts, were the  stand out actors. An average night at the theatre. 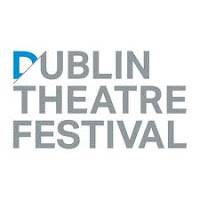 We reviewed Beyond the Brooklyn Sky by Michael Hilliard Mulcahy, which also features in the Dublin Theatre Festival,  two weeks ago. The similarity with this play was extraordinary; fortysomething friends who recall  their collective youth, one of four  male  friends is not present and recalled, a daughter as the link to the current generation, a lead actor who plays the guitar and sings, the returned emigrant who came back to get the woman who is now married, the pop music as a nostalgic device, a fight involving the absent one, the reveal under inebriation etc. Amazing!
Beyond the Brooklyn Sky  was the better.

Here is an Irish Times piece on Declan Hughes
Posted by Cathy Desmond at 12:28 AM