'Listen to This' author and more at Galway Arts Festival


On swift sail flaming From storm and south He comes, pale vampire Mouth to my mouth.
from Ulysses Joyce

Wedged in between the departure of the yachting  crews and the arrival of the horsey set, Galwegians  play host to an annual arts festival and I paid my first visit  on Saturday.

It was quite a coup for GAF to secure prestigious writer and trail blazing  music blogger, Alex Ross on his first visit to Ireland. At NUIG, I wondered whether I had the right venue for a celebrity lecture as the largest group in evidence was a wedding party taking advantage of the photogenic  quadrangle and the festival signs were unassuming to say the least . I pressed on in hope of finding a buzzing literary hive and plumping for one of a selection of doors to the Aula Max, I entered to find myself in a lobby space with not so much a feel of a lively mix zone as a vaguely disconcerting sense of a staff common room before I was directed back outside  to the 'students entrance' of the upstairs lecture hall.

Tiernan Henry, lecturer in Geology at NUIG, gave a warm introduction to, Alex Ross,  author of Listen to This and The Rest is Noise  and music critic of the New Yorker, brandishing   a  copy of the 1999 magazine containing his essay ,  The  Wanderer on Bob Dylan. Anticipating his next book, Ross delivered a  paper, outlining some resonances in James Joyces' work with Wagnerian operas with particular reference to Ulysses and the |Flying Dutchman.   Ross's  passion  for the language  of literature shone through particularly in this live experience as he effortlessly peppered his talk with quotations  from a diverse range of sources including poetry by Douglas Hyde,  and the English translations of Wagnerian operas from the Carla Rosa Opera Co archives, regular visitors to the Gaiety in Dublin.  A fellow attendee remarked to me that the scale and diversity of cross  references in Ross's work are reminiscent of  the Wagnerian tome, Ulysses itself.  Despite Ross's efforts, the event felt a bit flat, with an air of a specialist post grad seminar rather than a buzzy mainstream literary event.  The venue with its huge elegant windows at each end  was rather large for the assembly and we could have done with  firmer anchoring to steer the event to a fitting close. Where is David Norris when you need him.

Nearby in the Bailey Allen Hall, the community orchestra, The Galway Sinfonietta,   performed a free concert under the umbrella of the Galway Fringe Festival. Opening  with a saxophone concerto by Glazunov  featuring Bertrand Fougeres and including works by Finzi, Romberg and Dvorak, there was a good attendance to support  the group conducted by John Roe. Anxious not to miss the first part of the  T'ang Quartet's presentation, I arrived just in time at  the packed St. Nicholas's  church and found a seat near the front all the better to appreciate the cinematic effects of the entertainment. However, maybe suspecting that less resilient  audience members might  slope off to the pub after the Buster Keaton segment, the order of the programme had been reversed to that advertised  and we had an hour of 20th century string quartet repertoire before the heralded cinematic element. 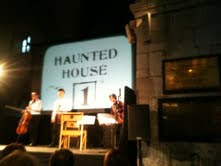 The cellist, Leslie Tan of the Singapore based ensemble gave cheerful introductions to  the items setting the context of the works drawing on less than cheerful  themes of funerals and  the Chinese Cultural Revolution. While quartets by Sallinen and Bright Sheng were well received as you might expect in  a city that boasts its own resident quartet and there was some thrilling string playing and a sense of joyful  communion within the ensemble,  it was rather too rich   for my palate . The score accompaniment by French composer, Baudine -Jam to the 1921silent classic, Haunted House was delightful and indeed there were peals of laughter in the aisles of St Nicholas. However for an event titled An Aural Visual Affair, the item  was all too brief with a running time of 15 minutes or so and one would have thought with the projector in place, we might enjoyed  another in the same vein. It was a bit like advertising a three course meal by leading with the promise of pudding.

I caught some of Tara Connaghan's and Derek McGinley's lunchtime session in Monroe's. Tara is well known in Clare as a former county Arts Officer. The duo, exponents of a Donegal style of fiddle playing, mixed jigs and reels, slow airs mazurkas and waltzes adding some personal anecdotes  for an appreciative audience. Both of them speak here  of their route in to fiddle playing and the role of family members in developing their skills.


Movies at the Christchurch Cathedral Morgan Cooke and Faust


Wagner/ Joyce from Alex Ross' blog The Rest is Noise

Posted by Cathy Desmond at 2:09 PM