'Into the Light' Regina Nathan at Cois na hAbhna Ennis 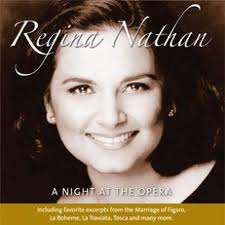 Looking at the Irish Times listing pages last week I note that there are not just one but two Clare singers featured in forthcoming events at the nation's premier concert venue, the National Concert Hall, Dublin. Soprano, Regina Nathan will perform arias associated with legendary soprano Maria Callas and young Clarecastle tenor Dean Power will perform at a gala  event to mark the 30th anniversary of the Hall. An opportunity to hear the highly acclaimed soprano in the more intimate venue of the Comahaltas headquarters in her home county presented itself earlier this season and I include this review  in retrospect of the event.

Although known primarily for her work in operatic repertoire, the programme featured songs from a range of genres. Concerts of assorted songs can present a staging problem with a string of numbers punctuated by too frequent applause. Here the soloist opted to assume a stage character with the set list designed to flow seamlessly from one to the other. Of the numbers presented in the first half, the arias by Bellini and Verdi were the most satisfying and suited best the strength of Ms. Nathan's voice.

In the second set, the numbers I most enjoyed were the brace of Kurt Weill numbers followed by a rendition of the Piaf number L'Accordianiste in a powerful English translation which really suited the theatrical treatment given to it . This trio of  numbers did work well as a sort of song cycle with the darker more menacing mood sustained unbroken by applause.

Regina Nathan was most sympathetically accompanied at the piano by Padhraic O Cuinneagain and there was no electric clavinova for this modest venue and a proper splendid grand piano was in place for the occasion which is no small boast for a relatively small scale event.

This was an interesting and entertaining evening and  approach and it did work very well in some parts. However in this intimate venue, I think her audience might have preferred her to simply set the context for her numbers in her own engaging character with some simple spoken introductions   . I felt the pianist could have been exploited more to add an instrumental interlude or two to vary the timbre of a solo production without distorting the concept of the show.

The venue, a modern purpose built space  serves as the Ennis base of Comhaltas Ceoltoiri Eirinn and activities scheduled here are  more usually associated with traditional music events and  it  is very comfortable and suitable for a cabaret or salon performance. As Regina Nathan is an artist of considerable international standing, she might have enjoyed greater support from Clare cognoscenti and the audience could and should  have been larger as the event was well publicised in local press and posters. With a plethora of performing groups in the town and county, the performing ability of Clare folk is truly amazing. I am not so sure about our ability to support our artists by also being good listeners . 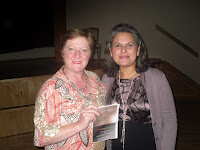 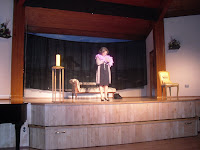 Posted by Cathy Desmond at 9:01 PM