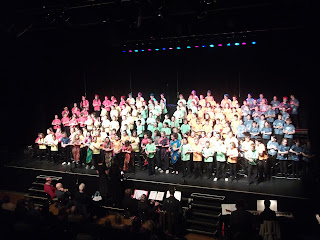 Bad weather and icy road conditions had forced the rescheduling of this event showcasing the work of an  inclusive music project in West Clare schools
I was delighted to catch  it having heard good reports about Máiréad Ní Chondúin's work and it was fortuitous that I met Maireid and husband Jim Armour at a choral event the previous day  .

There were two concerts lasting an hour or so  and I heard the older group made up of 3rd to 6th classes from  5 West Clare schools.  The Junior Group under the theme title Songs From the  Music Ark  included familiar songs  Shoe the Donkey,  Dilin O Deamhas, Ill Tell me Ma, The Big Ship Sails, Bingo and Tingalayo in a set list of more than a dozen songs.


The Music Train  featured  a good mix of familiar Irish  favourites , ethnic folk songs, standards and newly composed songs with an interlude  of some trad tunes by instrumentalists.   How lovely to hear Clare schoolkids singing Beidh Aonach Amarach  i gContae an Chlair . The group numbered about  150 children dressed in brightly coloured tie dyed tee shirts in a variety of colours . At one point a dozen or so kids  disappeared into the wings to pick up their instruments. More impressive however  was that every child wore a tin whistle around their neck and contributed to an instrumental item , so this element of the programme was not limited to those accessing extra curricular music tuition.
A vital element of the production were the steps which allowed every child to be seen easily.

The was a good sized band which added  much colour to the proceedings . I loved the saxophone  (Adam Daniel) and flute (Martin Conway)  lines in Engine Engine . Legendary musicians Chris Droney on concertina  and Peadar OLoughlin on fiddle  (joined by the fabulous fiddler Maeve Donnelly) were in the pit  to support their grandchildren.
.
Theatrically attired Aisling O Gorman arrived on stage pushing a shopping trolley of novelty instruments to lead a  bit of audience participation .  This didn't work very well for me . The audience were just  not that inclined to participate and it is difficult to for a performer to connect with the  audience with the house lights down. The kids lost focus when the spotlight was off them for more than 30 seconds  and the segment would have benefitted from being trimmed a bit.

The venue was ideal for this type of event and accommodated the large group of children and family members comfortably and there was a pleasant buzz in the foyer afterwards ( although no coffee) I have no doubt , the occasion will provide memories to treasure by these young performers

Well done Maireid and  team .  Wishing you well as you carry the project forward into 2011