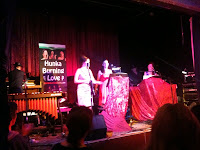 Another evening, another summer festival. Tonight I headed east to Mountshannon which had a languid continental feel to it with patrons sitting outside the pubs and restaurants. The glimpse of the dancing feet of a flat capped sean nos dancer drew us in to the Mountshannon Hotel bar for a closer look. The band of musicians appeared to be a mix of locals and visitors with european and oriental faces in the mix and the audience were a colourful blend of all sorts with three Hells Angels sitting in the corner . Highlight of the night was the Hunka Burning Love Soul act in the local hall. There was something reminiscent of 'The Committments ' about the setting, community hall with small stage draped in red velvet for the evening . The group made of glamorous trio of female vocalists, drums, bass guitar and front man on marimba ? and harmonium. This is a very slick outfit who had the capacity crowd on their dancing feet in rhumba time and set apart by the classy string riffs of Diane Daly's violin and the easy assured style of front man Boris Hunka who sounds just like Jools Holland. Catch them if you can . Cool !!
Posted by Cathy Desmond at 10:20 AM