All the world is shadow and sun


Greenshine are a family group in a mellow folk meets popular vein. Shadow and Sun, the title of one of the tracks sets the mood for the album mixing sunny cheer  with the odd dark cloud . There are 14 songs- some covers and some from the collaborative efforts  of Noel Shine and Mary Greene , They are joined by daughter Ellie in  smooth blended  vocal harmonies and understated finger picking on guitar, mandolin and ukulele  with the  dab of a whistle or harmonica here and there.  Martin Leahy adds a light touch on percussion.Meet me in the Garden as the sun is going down, I'll follow the sun, Samhradh Linn, the sunshine soaked lyrics abound. Daughter Sadie Shine does a turn on a Beatles number, Ruby Tuesday.
I was reminded of Loudain Wainwright 111   in the pictures drawn from the ordinary everyday domestic  and John Denver in the cheerful  unruffled style. The voices in the solo numbers sound real,  unchanged by the recording process as if you were listening to them playing in their kitchen as indeed they maybe as they produce their own records in their home studio.  The album is dedicated to absent friends including Thady who graces the cover.  Nice and easy on the ear. A sunny delight!

I was sittting on this review hoping to release it near a gig.  Greenshine however I learned were in Jordans Bar during Sproai Festival. They will be the guests of Frank Hayes of the Island Music Club at the Highway Bar Crusheen Co Clare   on September 13th. 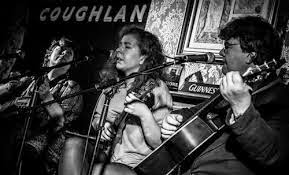