Back in 2012, I heard some of Beethoven's Irish songs at a Music for Galway recital.  My report is here. I was intrigued to think of Beethoven wrestling with Irish airs in the midst of a  Europe at the height of the Napoleonic wars.  Another opportunity to hear the songs presented itself at the Kilkenny Arts Festival and I reported on the event for the Irish Examiner. The article  appeared  on 16th August. As it did not appear in the online  edition,  I present it here.  https://drive.google.com/file/d/0B8tZsiLja6jUTUFpMkgyTlM1R1k/view?usp=sharing

Beethoven’s Irish Songbook Revisited  *****    published in The Irish Examiner 16th August
The confluence of elegance of 19th century  art, music and architecture made a performance titled The Irish Songbook  in the Long Gallery, Kilkenny Castle a feast for both the eye and the ear. Presented as part of the Beethoven Quest strand of Kilkenny Arts Festival, the performers featured four contrasting voices with the Fidelio Trio.
Although Thomas Moore is generally accepted to have been the major player in bringing Irish songs to a worldwide audience, Beethoven also had a part in improving our cultural image in Napoleonic Europe when he accepted a commission to arrange a collection of airs from Scottish publisher, George Thomson. Reports state it was the poet Robbie Burns, who pointed out that many of the melodies were in fact Irish and persuaded Thomson they would be more 'saleable' marketed as such and  duly, a selection of airs with accompaniments for piano trio  was published.  Although Beethoven requested the words so he could 'effect the correct expression'  he didn’t have them and this may have contributed to the songs’ dubious reputation. The late Tomás O Súilleabháin embarked on substituting the original texts with more suitable alternatives. It was these texts we heard in Kilkenny in a selection of  17 of a total of  72 revised settings.
Mezzo soprano, Alison Browner opened proceedings on a savvy humorous note, When I was a Maid, before adapting her rich creamy tones to draw out the melancholy in Moore’s, How Dear to Me the Hour. She was followed by Eamonn Mulhall whose light and airy tenor was just right for the sentimental lines of Burns, O Stay Sweet Warbling Woodlark. Soprano Aoife O Sullivan’s rendition of Burns, The Catrine Wood was all winsome  charm. There was a quiet murmur of approval for baritone David Howes’ first solo contribution, a setting of Byron’s love poem, The Kiss, Dear Maid . There were duos, trios and to finish, all four took to the platform for a jaunty, Quick We Have But a Second. The Fidelio Trio put a degree of light and shade into Beethoven’s  Ghost Trio. The performance was marred only in that they were out of sight to most in the long space and would have benefitted from a platform.
In the words of Thomson, these songs were rather like the paintings and tapestries lining the Long Gallery, ‘exquisitely coloured and highly finished pictures’.   Superb!

Eugene Downes was eloquent and clear in his opening introduction. Margaret O Sullivan and Mary Scarlett were present to hear the results of  their fathers lifetime project of presenting the songs with  alternative texts.   A major DIT project  resulted in the release of a 4 CD set of the 72 songs and a special performers edition will be  published shortly. The songs were the subject of radio documentary with broadcaster Liz Nolan and you can listen back here . 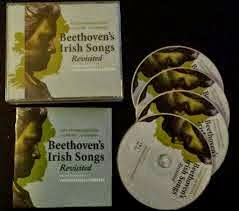 While I enjoyed the songs on both occasions, I can't say I was that struck by the superior quality of the revised settings. I was amused at Moore's lines of 'When through the piazzetta' which rhymed with Ninetta. but to be fair that was not representative. I must also admit to a twinge of misgiving.  If Moore with held the lyrics in his lifetime  much to the chagrin of Thomson  to preserve them for his own project, is it  quite fair to appropriate them after his death?  What is really terrific,  both in this volume from DIT and in Una Hunt's 6CD  collection of Moore's Melodies, are sound recordings  of many of the young emerging  Irish voices.  Most of them would not be recorded at this point in their careers were in not for these two substantial endeavours.

Posted by Cathy Desmond at 6:16 PM