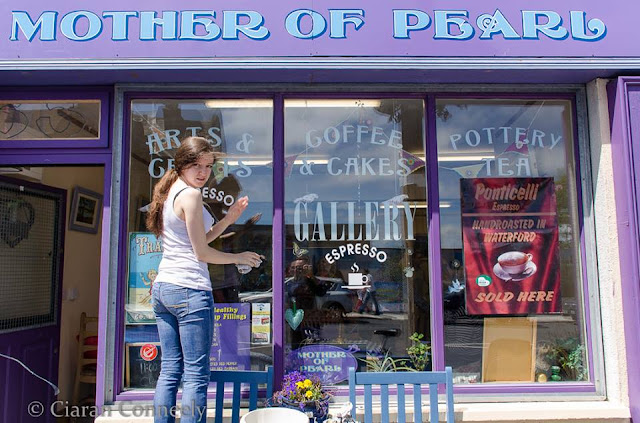 Oh I do like to be besde the seaside. I almost didn't make it to the prom. I dilly dallied and fell into the rose tinted hole that is  the Mother of Pearl Teashop where across the road, a  brass band  were adding a  diddly um pum pum  to the vintage  afternoon tea party. 'That's lovely music. No ding ding, bang bang like the modern stuff' said a passerby.  No sooner had the splendid boys and girls of the Barrack St Concert Band packed away their cornets than the Welsh Crew arrived. An disparate assembly of poets, troubadours and a dancer and the afternoon tea  morphed into a soirée. I loved hearing Dominic Williams read his poetry to dancing accompaniment and Anne Lister sang some terrific songs based on myths and folk tales. Captain Bob sang  comic song from his naval days. Eventually fortified by very good cake and sandwiches, I felt ready to venture to stroll along the prom, prom, prom. Too late for the airshow and sandcastles but I came across the splendid busking duo Richie and Jacob, two local young lads on guitar and mandolin and amps powered by audience pedalling who were going down a storm.(perhaps not the best metaphor for a weekend blessed with sunshine).
Well done director Sean Corcoran and team. Looking forward to next year already.

Check out the Tramore Prom Fest website  for more images and details.

. Have a listen to  Richie andJacob them on audioboom clip 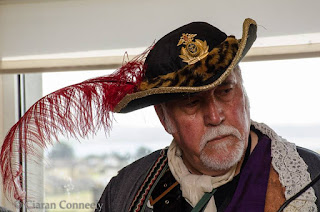 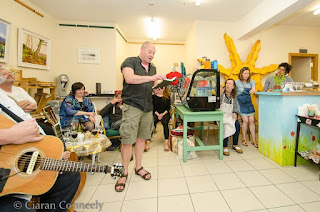 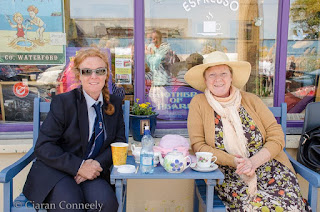 Posted by Cathy Desmond at 8:04 AM