One Act Operas at Castalia 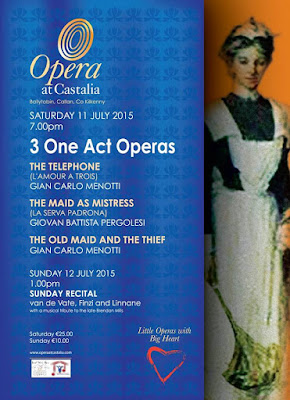 There is a lot to be said for one act operas. If you don't like them, they won't trouble you for very long. I note that Kilkenny Arts Festival has programmed two works this year. I enjoyed an evening devoted to one act works in Kilkenny last year. My report is here . This year's programme looks attractive, a Menotti sandwich with a Pergolesi filling and there are super young singers lined up and some big names scheduled for the Sunday Recital. Here is founder Alan O Conchubhair's programme note I note that baritone turned tenor Owen Gilhooly is director for one of the works Note the early start time of 7pm

'Opera at Castalia, Ireland's one-act opera festival takes place in July each year in the beautiful surroundings of Castalia Hall and Amphitheatre at the Camphill Community, Ballytobin, Callan, Co. Kilkenny. In its four year history this little festival has produced operas by Mascagni, Menotti, Sullivan, Walton, Rameau and Holst. Last year along with Riders to the Sea by Vaughan Williams, they presented two European premieres, In the Shadow of the Glen by Nancy van de Vate and The Bay of Fundy by Fiona Linnane. The last year has been a sad one for the Opera at Castalia family following the death of beloved co - founder, Brendan Mills.

Brendan's husband, Alan O'Conchubhair has said that Brendan's philosophy was that the show must go on and so on July 11th Opera atCastalia 2015 will present The Telephone and The Old Maid and the Thief both by Gian Carlo Menotti. Sandwiched between these two classics of 20th century opera will be an English language version of Giovanni Battista Pergolesi's La Serva Padrona. The cast includes Maria McGrann, Gerry Noonan, Andrew Gavin, Laura Gilsenan, Rory Musgrave, Dara McMahon, Maria Hughes, Muireann Mulrooney and Tim Shaffrey.
The Sunday Recital the following day at 1pm will feature young tenor, Andrew Gavin singing Dies Natalis and a preview of a scene from Composer in Residence, Fiona Linnane's new opera, The Breakfast Table, which will receive its World premiere at Opera at Castalia 2016. The recital will conclude with a musical tribute to Brendan Mills with contributions from Imelda Drumm, Laura Gilsenan, Virginia Kerr, Sandra Oman and Cara O'Sullivan.
The 11th and 12th July promises to be a wonderful weekend of music in rural Kilkenny. Why not come along and listen to some 'little operas with big heart'.

Posted by Cathy Desmond at 9:47 AM