Pride and Prejudice at Curraghmore Gardens 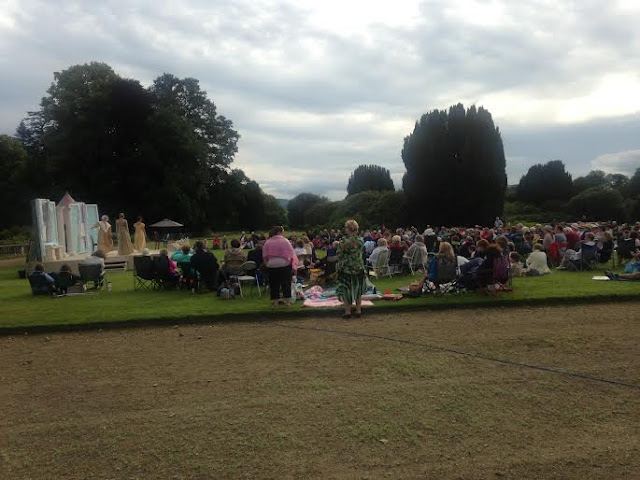 Any attempt at outdoor arts events is a perilous venture in  capricious Irish weather. But when the sun shines, it is a triumph of hope over experience and a glum muddy-field event becomes a glorious al freco spectacular. So with an eye on the sky, I made my first visit to the gardens  of Curraghmore House for Chapterhouse Theatre Company's touring production of Pride and Prejudice. The combination of fair weather and an opportunity for a  first glimpse at one of hidden Ireland's grandest houses was a compelling enough draw .  Add in all the  fun of fine spirited performances from the eight strong cast of Chapterhouse Theatre Company, whose theatrical presentation of Jane Austen's classic resonated in such perfect harmony with the grand setting that we could well imagine that we were sitting on the lawn at Mr Darcy's Pemberley.

There were a couple of aspects of the performance that impressed me particularly. I hadn't expected to be able to hear the dialogue so clearly in the open air setting. The voice projection and diction of the entire cast was impeccable. As you'd expect, some of the nuances of the more insipid of Austen's genteel characters were lost but the pantomime quality of the buffoons and baddies had the audience of all ages  chuckling on the lawn and  engaged over the two hour duration.

The  effectiveness of a solo flute to add a pastoral touch with music interludes was simple and delightful and much preferable to any  backing track, however sophisticated. The rendition of The Ash Grove  in a drawing room scene elicited a genuine ripple of applause.

And  if all that confluence of  elegance and harmony in architecture, horticulture and prose wasn't enough to ensure a memorable afternoon, there was cake too. We enjoyed  the best Victoria sponge in the newly opened Curraghmore House Tearooms in the courtyard. Have a listen to audience memberand local resident Alice O Brien's reaction in the audio clip


Chapterhouse Theatre Company are touring a number of productions in Ireland until the end of August. You can catch them at Fota House on Wednesday , Mount Juliet Kilkenny on Thurs. They return in August to Wexford to Kilmokea and Wells House.  Catch them if you can. I wish them fair weather.