Bloomsday: The Producers at BGET

The theatre's so obsessed
With dramas so depressed 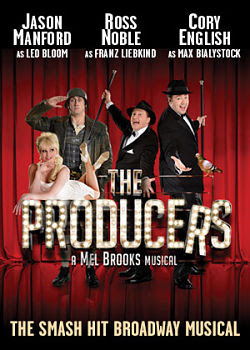 'A show with a high cholesterol level' is how comedian Phil Jupitus describes The Producers.  I saw Adam Spiegel's touring production in Dublin yesterday.  I haven't been convinced by previous amateur productions of this show or indeed the 2005 movie version. Clocking in at just uner three hours long,it has to be uber slick to  work or it risks feeling  bloated. This is terrific!. A glorious flamboyant spectacle of singing dancing and outrageous comedy from a twenty strong  solid ensemble and eight piece pit band.

Have a look at the behind the scenes promotional video which features, Spiegel,  the producer of The Producers talking about the production. Unusually it features not one but two established British  stand up comedians turning their hand to theatre and they do it very well indeed. Jason Manford as wannanbe producer, Bloom has a lovely warm lyrical  timbre to his voice and Ross Noble brings a manic intensity to the neo Nazi writer Liebkind. American actor Cory English plays Bialystock. His second act frenetic monolgue is a theatrical tour de force that would be worth the admission price alone. David Bedella has an excellent  singing voice and a mesmerizing stage presence . Stephane Anelli is delightfully OTT as his camp assistant Carmen Ghia. Tiffany Graves is a knockout as Ulla . Beyond the leads, the company play many supporting roles and I particularly liked Paul Hutton's choreographer and the Oirish dancing cops.

The BGET is a very impressive  theatre. Striking modern exterior leads into a comfortable interior There is  good leg room and a  pleasant spacious foyer space  The Grand Canal Dock facing the waterside and lined with hotels and faux Italian coffee shops is an attractive environs to linger in on a Summer afternoon. At less than €40 for midweek  two tickets, this was extraordinary value for a West End quality production. 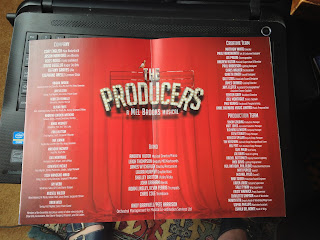 Posted by Cathy Desmond at 9:27 AM