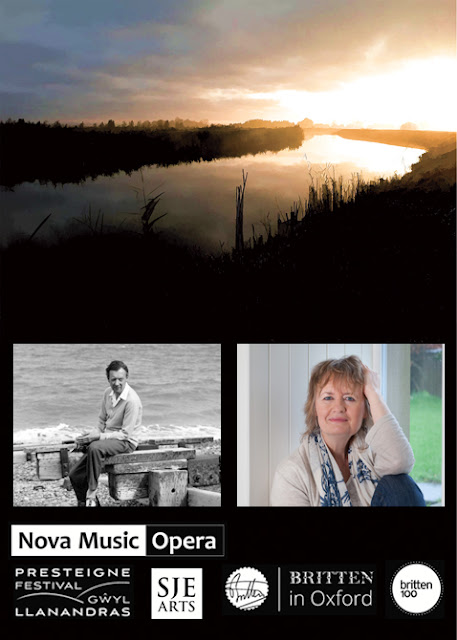 There is no escaping Benjamin Britten this year. The centenary  has been a catalyst to blow the dust off some of the more seldom  heard works. In London last week, I was tempted by the novelty value and calibre of the cast, to visit the renowned chamber music venue, St John's, Smith Square,  for Opera Nova's production of Curlew River.
I was in time for a pre show talk with composers, David Mattthews and Thomas Hyde fleshing out the good programme notes. (You know this is a high brow gig when Matthews is credited as being Britten's 'amanuensis')

It seems that Arthur Sullivan wasn't the only British composer to be taken with things Japanese and Britten was inspired by  the Noh theatre tradition in his writing of Curlew River , one of three short works, titled  Parables for Church Performance, the fictional title placing the drama in the fenlands of East Anglia. (It seems like sacrilege but I can't help musing  on the parallel with the plot device of the Mikado of a parent searching for a missing child)
The playing of extracts from the Japanese play, Sumidagawa that inspired the work had me heading to the bar for something to sustain me through  an hour of more moaning glissandos in a similar vein. The musical style of Britten's work however wasn't overtly oriental, although sparse and simple in texture.


The piece opened with the robed, all male cast processing up the aisle singing liturgical plain chant before the main protagonists assumed simple costumes for the telling of the tale of a journey in search of a missing child, the expression of the attendant grief and the resolution of finding peace at last. The elegant simplicity of the staging,the liturgical nature of plot, the ecclesiastical  setting and anchor of plainchant made this production feel  more akin to a passion play than anything else. A simple turquoise expanse of cloth served as  the river and a wooden mast and single white sail was  hoisted to signify the start of the journey.


The bulk of the  singing is shared between Mark Milhofer's Madwoman and Owen Gilhooly's Ferryman. Tenor, Mark Milhofer's performance was intense, almost unnerving. Baritone Owen Gilhooly brought out all the nuance in the role of the Ferryman You wanted to boo and hiss at his  sneering at the Madwoman and heave  a sigh of relief at the the softening to a more sympathetic mien.

The nimble musical ensemble placed to one side made up of a half a dozen or so assorted instruments including harp, flute and percussion added  colour rather than harmonic texture to the canvas.

This was an intense  and absorbing evening, quite unlike any other operatic experience I have enjoyed, not least for the solemn hush  of the listening audience gathered.  You literally could have heard a pin drop for the duration and the cough index was zero.. That doesn't happen very often and it is thrilling when it does. Marking Britten at 100? - Opera Nova's,  Curlew River will do me very nicely to mark the centenary.  Thank you very much. At £10 for a side seat near the top, it has to be  one of the best value tickets for a top class experience.

The production is a touring production and auspicious in that It marks the debut of Opera Nova. The production  moves to Presteigne Festival later in the month and later to other festivals in Oxford and Canterbury.


Venue Notes. It would have been nice to have dwelt a little  longer in the lovely  Crypt. Although the programme notes clearly stated that refreshments would be available following the performance, this regrettably was not the case.

www.sjss.org.  St John's Smith Square . Why an apostrophe but no comma?

I was surprised the event did not appear in the Time Out music listings either in the print or online version. 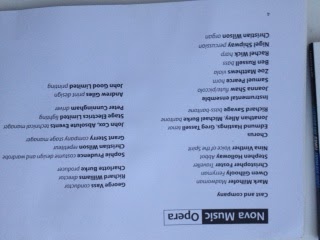