Climbing the Walls: Spraoi at 21

Is it really 21 years since the launch of Spraoi, a festival dedicated to street entertainment? In that time my children were born and have grown up and I have lost track of the number of times that I have moved house. Although I have lived away from Waterford for most of those years, Spraoi has remained a constant as we timed trips back for the August Bank Holiday weekend with the prospect of lots to keep all the family entertained over the weekend.  Organising a weather dependent festival might seem a triumph of hope over experience but Spraoi has weathered the storms and yet again provided thrills for young and old, high, middle and low brows on the streets of Waterford, free of charge and accessible to all.  The entertainers have reached many who maybe never or rarely set foot inside the city's formal theatre spaces. Over the years, the team have experimented with the format but the essence of fun for all has remained at the core. 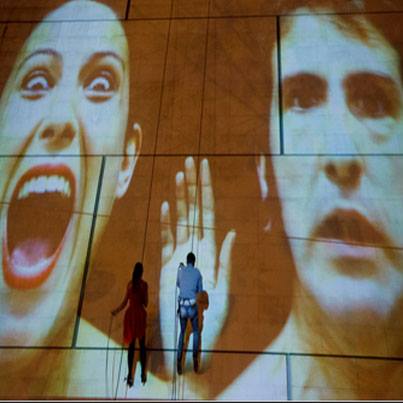 There have been so  many  memorable acts. You can read my highlights of 2011 in a link below. The Ukulele Orchestra of Great Britain who returned to Waterford earlier this month played here in Spraoi 2007. Arts critic,  Liam Murphy says he heard them play on the back of a curtainsider lorry. They don't do too many of those gigs these days. I think my favourite steet theatre presentation of all was Silent Movie presented by Bash Street Thetare Company where slapstick physical comedy was played out to live piano accompaniment. I also loved the accompanied silent movies in  Christchurch. Sadly, I missed Eric Sweeney's playing to Frankenstein this year. Much of the pleasure comes from seeing the medieval portside city anew as the various streets and squares provide a backdrop for the action. Over the years the improvements to  the streetscape and architecture have been striking and we have remarked here before on the confluence of elegance around the Mall area with the restoration of historic buildings and the unveiling of new ones. 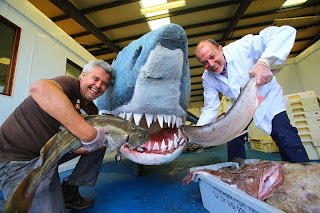 This year my highlights included the  daring vertical dancing Catalan duo Delreves, who literally climbed the walls of the Waterford Crystal building in a thrilling son et lumiere. Good to hear  Barrack Street Concert Band  flying the flag for  local musicians. The Pull Up Orchestra were a lot of fun and the sun beamed down on Paddy Cullivan and the Camembert Quartet's good humoured gig on the timber floored William Vincent Wallace Plaza.  What a terrific amenity, this space is. Younger family members raved about the ten piece band Papa Zita's featuring local musicians Hugh Beglin on trumpet and Kate Fitzgerald on vocals.
Lowlights were amplified solo performers around John Robert Square/ O 'Connell Street area, most likely not officially part of the festival. City Council needs to look at regulating busking this area. Personally I would like to see amplified buskers discouraged as it can create a muddy backwash of sound extending a distance. The drumming troupe, Torann  on the Mall lacked a certain sartorial elegance (ie shirts) and didn't really have the bronzed torsos to carry off the bare chested , underpants showing over assorted shorts look. But these are mere quibbles that we mention to show our critical faculties are working.

The parade  was reinstated to its traditional spot on the Sunday night and there were many giddy kids and indeed giddy  adults anticipating the wonderfully crafted floats under the 'Flotsam and Jetdam' theme. The weekend was rounded off by the traditional fireworks and then the rains came........
Bravo Spraoi. We send a virtual applause  to director TV Honan  and  artistic director Mike Leahy, the dedicated  team and the dozens of volunteers who combine to show what can be achieved. We  congratulate and thank you for your sustained efforts over 21 years.

Movies at Christchurch 2011
Posted by Cathy Desmond at 1:43 AM