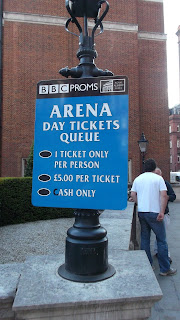 It was a glorious warm sunny day in London on Tuesday, perfect weather adding to the general good humour of the hundreds of queing promenaders. The crew of the HMS Indomitable  docked at the Royal Albert Hall for Proms no 60. The much lauded Glyndebourne Festival production  combining the large all male cast and chorus and the London Philharmonic Orchestra delivered a thrilling, gut wrenching performance of Benjamin Britten's nautical morality tale. Bass, Brindsley Sherratt's sinister black stockinged Claggert  hadn't a shred of a redeeming feature. Mark Padmore as the pale and tortured  captain and Jacques Imbrailo as the good hearted, doomed Billy were impressive, their emotional solos cutting through the cavernous space to pierce hearts all over the huge auditorium 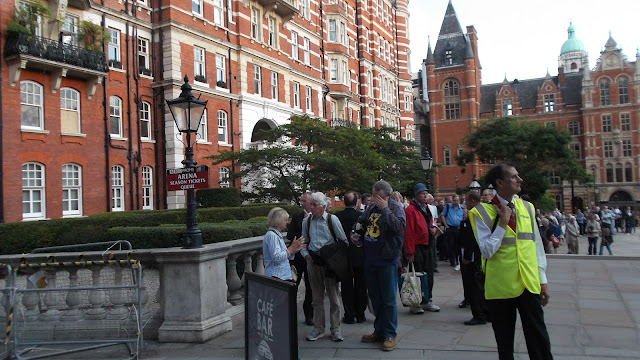 The work was semi staged with singers in 18th century costume and the orchestra placed on platform between the soloists and the large chorus. The lighting was subdued enough to create an atmosphere but sufficient to read the libretto.  The visual and aural impact of seeing the brass and souped up military percussion of the LPO released from the sunken pit of an opera house was an added advantage 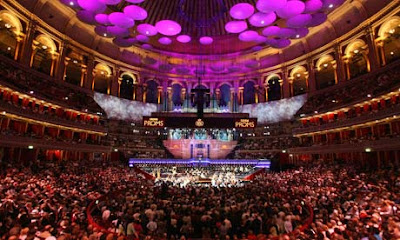 An auspicious event from an Irish perspective in that no less than three young Irish singers made their Proms debut in the production.  Dean Power as Main Top , chorus member Padraic Rowan had a brief solo and Limerick baritone Brendan Collins also featured in the cast as Arthur Jones. Bravo ! So proud of you all .
I joined the crowd  gathered at the stage door to salute the performers as they disembarked for the last time. You can here my stage doors interviews with tenor, Dean Power and bass baritone, Padraic Rowan (chorus )   in the audioboos below.

This report is dedicated to artist and opera fan Sonia Schorman.

Posted by Cathy Desmond at 8:21 AM