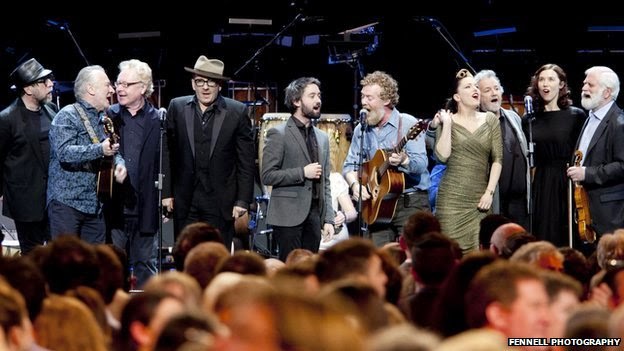 On TV : Ceiliuradh, a concert produced by Philip King at the Royal Albert Hall as part of the State visit of Michael D Higgins featured a familiar line up of Irish artists with an emphasis on traditional performers. Dermot O Leary did a good job of presenting. I wish I could say, I loved it but  it it was all a  bit too maudlin to strike the keynote of celebration and the evening had an awkward feeling of forced informality about it for my taste. Moreover,  it didn't succeed fully in the central objective -to adequately represent the Irish artistic community in Britain . Here is the quote from the official government press release -Ceiliúradh (Celebration) will showcase the strong artistic and creative links that exist between Ireland and the United Kingdom, as well as recognising the significant contribution of the Irish community in Britain

To begin with the positive:  Some of the items worked better than others . Neil Martin's arrangement of Moore's melodies moving from the West Ocean String Quartet's rendition of Silent O Moyle  segueing into a massed band version of Minstrel Boy with the bands of a UK regiment, the Irish Gurads and the Irish Defence Forces Band  seemed best to celebrate an element of shared culture and to fully exploit the scale of the venue. Perhaps you had to be there but, nine minutes of the come all ye,  prison song, from Behan's 'Quare Fella' The Auld Triangle might be fun in Jordan's pub on Tuesday night after a few pints but seemed to be indulgent and not at all that appropriate in the formality of the huge crushed velvet clad interior.  Elvis Costello's song,  Tripwire seemed an odd and gloomy choice of metaphor to introduce to the procedings. Was it some kind of political statement? Who knows. It  just didn't feel right to me. Glen Hansard's dirgy song, Falling Slowly is hardly an upbeat addition. It  is the only song you are banned from playing on Waltons' show room pianos apparently  and has surely outlived it's shelf life. The Gloaming, with an American  (note -not British) / Irish line up, who have had fans tweet swooning over their tasteful minimalist approach, were saved til last but 'their songs of yearning in progressive style' fell flat when a bit of good old fashioned, cheerful barn storming  was called for to close out the procedings.

If a key element of the event was to celebrate Irish contribution to British culture, where were the Irish artists, first and second generation,  embedded in British Society forging successful careers in the UK? Apart from Fiona Shaw, organist, Catherine Ennis and Elvis Costello most musicians on the bill, as far as I am aware have their feet firmly planted on the old sod. Yes Lisa Hannigan resides in London as does Imelda May now but neither could be identified as having made a significant contribution to that scene  or to be identified as  part of the diaspora  just yet.


I am always surprised that the successes of Irish classical artists resident abroad tend not to be given that much attention at home. At risk of sounding like the grumpy old aunt muttering about the 'cousin with a grand voice not invited to sing at a wedding', here are a few artists that I felt merited  an airing . Robin Tritschler, chosen as one of the BBC Young Generation Artists, a select group designated by a BBC seal of approval as being extra special .
Mezzo soprano, Ailish Tynan soprano is no stranger to the Albert Hall having performed there frequently at the Proms. and consistently elicits rave reviews from the British and international press. Violinist, Rita Manning based in London led the Academy of Saint Martin in the Fields Orchestra, one of the most coveted positions in the classical music milieu,  frequently appearing as a soloist. Might not James Galway, an icon of the music industry have done a turn? There are several young Irish singers making Royal Opera House debuts this year,  A call to Donagh Collins, CEO of  the prestigious Askonas Holt artists management agencies or John Gilhooly the CEO of the Wigmore Hall, the premier chamber music venue in London, would have opened up a healthy address book of artists doing us proud in the UK without the need to resort to charter a plane for the same old, same old  familiar  Montrose faces.

Too European  Classical you might say.  Well- On the folk scene, while I note the presence of John Carty, the London born fiddler among the house band players, there wasn't a sense of communion  with the English trad and folk scene where you wouldn't have to dig too hard to find an Irish connection.  A browse through the nominees of the BBC Folk awards would have yielded some likely contenders. Clannad and  Martin Carty, were given lifetime achievement awards  at this event in this very venue a few weeks ago.  My personal pick would have been Manchester fiddle player, Gerry Diver, stalwart of the English folk scene, whose thought provoking Speech Project gathered an eclectic ensemble of top class musicians  based in the UK.  Indeed, Diver paid homage to Martin Hayes on the project.  While critically very well received and more avant garde and multifaceted in many respects than the Gloaming, my own experience was that it was not well supported by audiences in Clare where I heard the ensemble, a bastion of Irish traditional music. Perhaps the  Irish love to go out and sing the songs but are not too receptive  to an overseas diaspora singing them back to us.  I was interested to read this  in a 2010 article by Toner Quin What about England

We have arrived at a moment in which the stunning music of the English folk scene cannot be ignored any longer. Its strength and depth means collaborations between new young generations of English, Scottish and Irish musicians are surely around the corner, a cultural development that can only bring the traditionally acrimonious divisions between the peoples of these two islands forward. It hasn’t happened yet in any high-profile performance, nor is it evident in recordings, -

While the encouraging political gestures all point to a healing of the political divisions, by including predominantly well known Irish and American musicians in the line up of musicians, I can't help but feel that Ceiliuradh missed an opportunity  both to acknowledge Irish elements on the British scene and to  heal a perceived disconnect with English traditional artists.


Stew of Complexity Gerry Diver  and The Speech Project at Glór http://cathydesmond.blogspot.ie/2012/10/stew-of-complexity-in-speech-project-at.html
Posted by Cathy Desmond at 3:16 PM