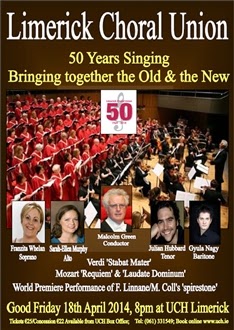 Good Friday marked a milestone in an epic music  project in Limerick.   One hundred and fifty musicians and singers took to the UCH stage to perform a programme resonant with the grief laden day that was in it.  The concert by Limerick Choral Union and Orchestra marked 50 years of consistently adding to the cultural soundscape of Limerick- a remarkable achievement. I was privileged to be in the orchestra for the occasion and witnessed the final stages of the resurrection of  these sacred gems for  a full house in Limerick's largest auditorium. The evening opened with a new work by Fiona Linnane and Mary Coll prefacing  a selection of of Classical and Romantic choral pieces under conductor Malcolm Green. Mozart's Requiem is familiar to me from the movie, Amadeus and it was exciting  to finally get a chance to get inside the work as a musician.


Over the years, LCU concerts have given Limerick audiences an opportunity to hear singers in the early stages of their professional careers alongside  more seasoned performers. On Friday we heard the much lauded soprano, Franzita Whelan with one of Limerick's own  favourite performers, Sarah Ellen Murphy. New kids on the block were two singers from the Opera Theatre Company stable.  Hungarian baritone, Gyula Nagy is one of the current crop of Young Associate Artists and English tenor, Julian Hubbard will feature in the cast of the Weills political opera, Rise and Fall of the City of Mahogany which comes to the Olympia stage in June as part of a collaboration between OTC and  Rough Magic Theatre Company.

Given that the endeavour ticked   many cultural boxes, engaging truckloads of local performers and offering a quality programme at modest cost ,a platform for professional singers, airing of new work by a local composer etc, it was surprising that the concert was not included on the programme of the City of Culture. I have commented here before about the lack of print media attention of main stream classical events in Limerick but it seems surprising to see this well organised and hard working outfit marginalized by a local cultural initiative in a year when they might have benefited from the head wind of such  an acknowledgement. You can read a local press piece here

** Despite an busy international and national career, it was my first time to hear Franzita Whelan who is one of select group to have represented Ireland in the Cardiff singer of the World competition (2001).  She was given a most  favourable mention in a letter to the Irish Times back in 2005, which must have had the RTE musicians squirming.  I often use this in my pre-concert pep talks for my students. You can read that  letter, 'NSO and Beethoven'  below.  Judging by the audience response, it seems that the ladies and gentlemen of Limerick Choral Union and our soloists on this occasion know very well the difference between playing and performing and hopefully will continue to do so long after the dust settles on the  City of Culture hoopla.

Last minute of concert followed by sustained applause from 1min in.

Madam, - What is the matter with the National Symphony Orchestra? It takes hard work to make Beethoven's ninth symphony sound dull, but there were moments in last Friday's performance which were almost torpor inducing.
The orchestra looked bored and this attitude was more than reflected in the music. Matters were not helped by poor co-ordination and a horn section that at times struggled to hit the higher notes with any semblance of accuracy. The soloists, with the sole exception of Franzita Whelan, looked glum; Ms Whelan at least looked as if she were singing an ode to joy.
The evening was redeemed only by the magnificent singing of the choir who, apart from Ms Whelan, looked as if they were the only people on stage who were actually enjoying themselves. They deserved their standing ovation, which is more than can be said for their accompanists.
Next time the Bavarian Radio Orchestra is in town, the members of the NSO should be made to sit in the front rows in order that they can observe the difference between playing and performing. - Yours, etc.,
FRANK BANNISTER,
Morehampton Terrace,
Dublin 4