The  great unwritten rule in sport is  'what happens in the dressing room stays in the dressing room'. Those fine people at Red Kettle have teamed up with the new Phoenix Productions to deliver the Simon Block play, NOT A GAME FOR BOYS and it breaks that rule. And that rarest of props the support jockstrap features.

The play is a comedy drama based in London. It's a three-hander and is set in the dressing room of a table tennis match. The characters are a group of taxi drivers, members of a team, who compete in the local leagues. We observe an evening when a crucial relegation battle is about to commence in the Premier league. There's a nice nod to Waterford audience as the team is called the London Deise Cabs.

It's a very funny work as the characters interact as alternative  duos whilst the 3rd member competes. There's plenty of dressing room male banter as they prepare for the game. 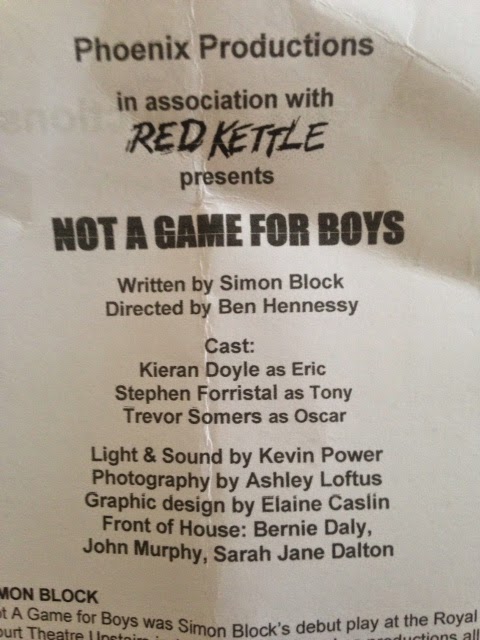 Kieran Doyle gave a masterclass as Eric the heart of the team who is obsessed with maintaining his team's status whilst juggling domestic issues with his wife and mother at home. He brought a great intensity to the role and his comic timing was excellent. Trevor Somers as Oscar was the  mysterious one of the trio, Stephen Forristal fresh from a backseat  romantic joust with 'a fare up the Aldwych' is further bothered by a demanding partner from home. The cast has a fine body of theatrical experience and it shows.

Do not miss a great night out at Not A Game For Boys with Kieran Doyle in smashing form in a glorious laughter Fest up Andy Jordan's Lane.
— LIAM MURPHY (@liammunster) April 3, 2014

Ben Hennessey directs  and does a fine job balancing the comedy and drama. The sound featured music from the mid 90's. I felt some off-screen sound from the competitive tables might have enhanced the atmosphere.

Great to see the Central Hall used again for live theatre and supporting Phoenix. The chance to carry a beverage from Jordan's is another draw.

Not just for boys, this is a  very funny play with  good acting. Recommended.

The play runs till 12th April.