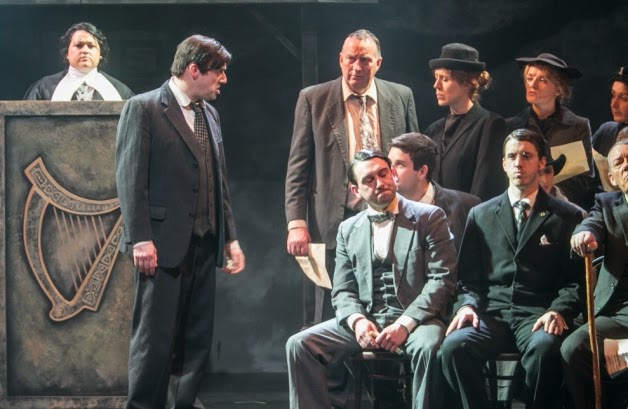 Amid a general tide of emotion and national pride as Ireland reveled in events in London as our best boy, President Higgins was invited to star in Come Dine With Me, the House of Windsor version, it seemed  timely in an odd way to finally see Michael Collins, the musical. It is not every day that you find a musical theatre piece based on political figures set amid a bloody backdrop of civil war. That's more usually in the opera bag. Think of all those Risorgimento Verdi pieces for starters.

I hadn't rushed to see this work written by Waterford man, Bryan Flynn when it was first produced in Cork in 2008. Judging by the rave reviews, I felt sure it would have a long run and tour. But despite the plaudits, it had a relatively short run, a few weeks in Cork and Dublin rather than months and then dropped out of circulation until it was revived recently by some amateur companies. So I  wasted no time and made a beeline for the Watergate Theatre for the Kilkenny Musical Society production on Tuesday night, lest it escape me again. It was good to see the Sold Out sign across the front of house billboard and I was fortunate to snaffle a return.

My expectations were high but I was not disappointed.   The resonance with 'Les Mis' is undeniable. There were  rousing anthemic unison choruses of the under trodden class mixed with the sparser keyboard accompaniment of the romantic ballads. Latin American rhythms abound. Add in uilleann pipes, (presumably recorded ) and whistle to add a Celtic flavour to the mix Kilkenny Musical Society did the show  justice and as well as I could imagine it being done.  All the stops were pulled out. The sets were elaborate, the sombre lighting and dry iccreating the gloom of a pre electirified Ireland. Michael Hayes was a charismatic and vocally strong Big Fella . Kevina Hayes looked terrific in the elegant 1920's costumes. Eoin Fingleton as Harry Boland was convincing in moving form earnest companion to bitter jilted lover. I liked that there was a degree of nuance to the characterization of the main players. Neither Dev or Collins are portrayed in simple black and white terms.

Perhaps it was the added piquancy of the days events in the UK but I have rarely seen the level of concentration over the course of an evening's theatre. The acid test --two teenage girls on my left sat engrossed throughout without once reaching to check their text messages. At the final curtain, the audience quickly rose to their feet in sustained applause.

For my ears, the sound was over amplified particularly in the large choruses and it took me a while to get used to the decibel level. Most of the sound appeared to arrive synthezised through the speakers giving the impression of a backing track. rather than a live band The clarinet timbre was the most effective in travelling directly from the pit musician (Stephen Mackey) to our ears.

The theatre was buzzing.  Kilkenny Musical Society representatives were front of house to meet and greet and there were those lovely china tea cups and a reviving cup of tea  in the convivial upstairs Gallery Bar at the interval . A remarkable show and what an achievement for one man, to have produced words and music. It surely deserves future airings and maybe a touring production. Bravo Bryan Flynn! 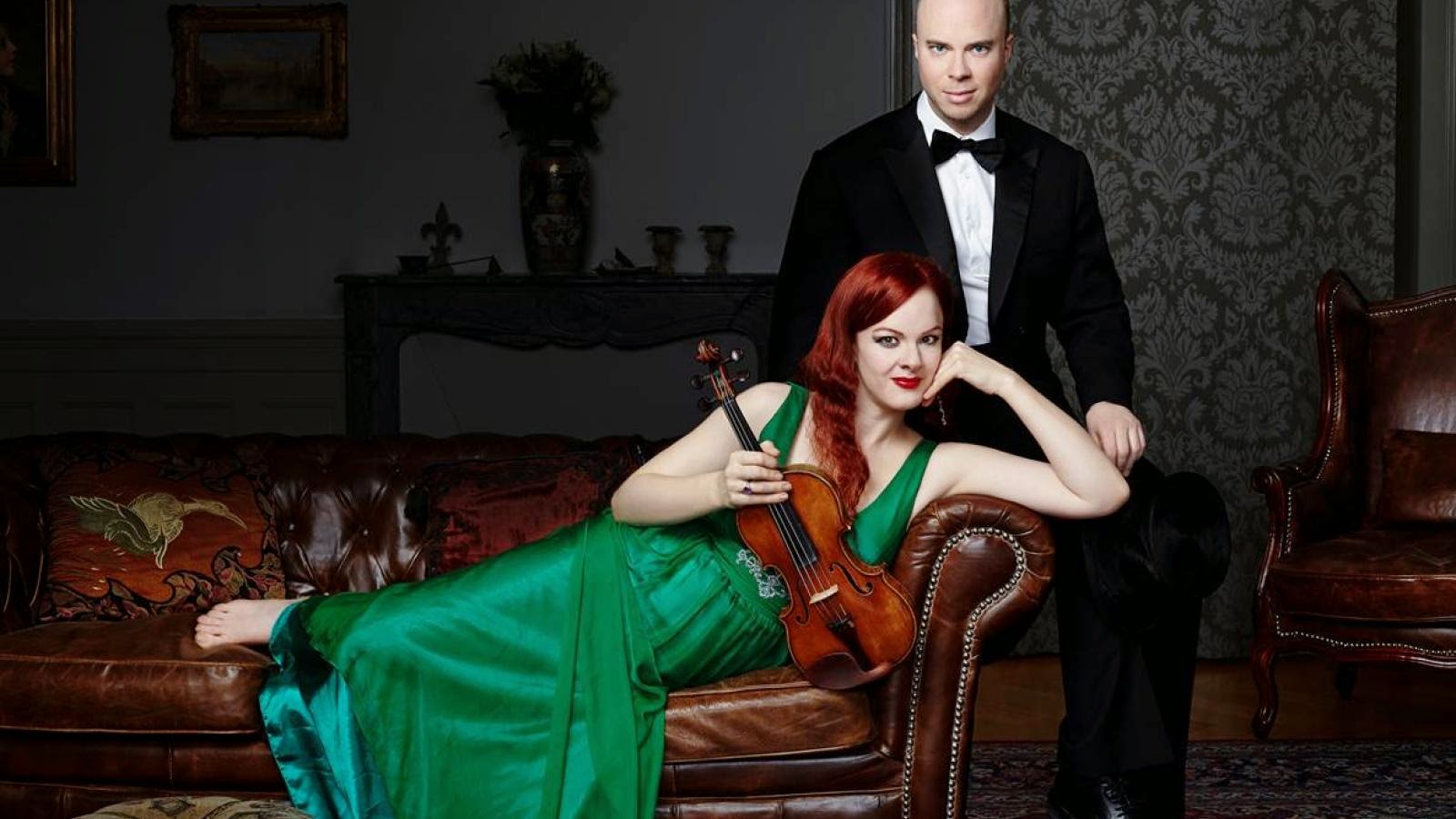 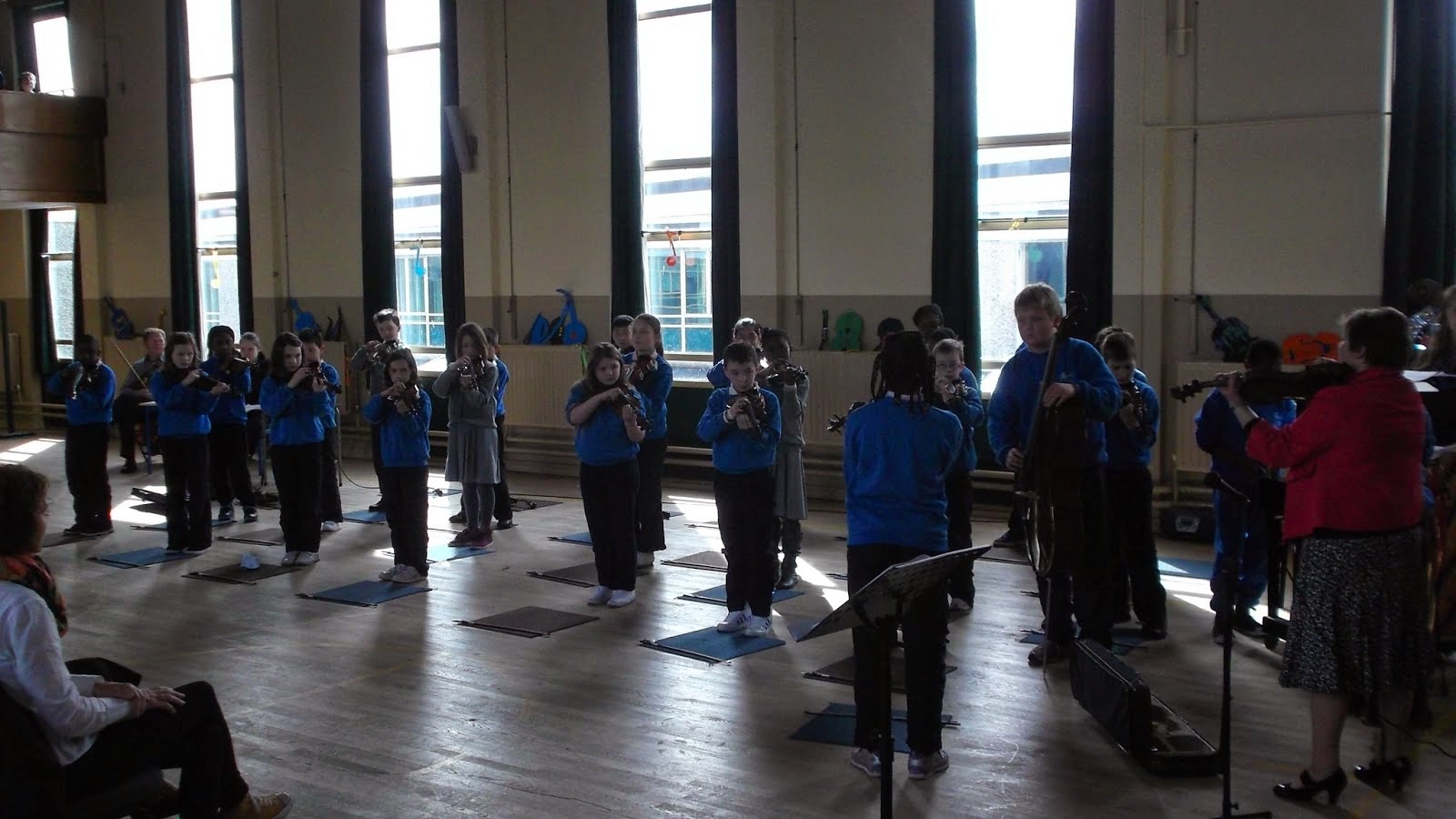 Spirited Swiss Duo at Christchurch Stunning is an overused word but Rachel Kolly d'Alba, acclaimed Swiss violin virtuoso was just that at Christchurch on Wednesday. You can read my report of the evening here.  What a pity, the audience was sparser than an artist of this calibre merited.

Schools Out Final Matinéé
On Friday, I bid adieu to my students at Holy Family Senior School  Ennis with a matineé performance with  all 80 students in 4th class. I am so very proud of them all. Over the last three years, 250 children class violin lessons as part of their regular school curriculum. I hope that for some of them, it will be a start of a journey and for all of them, the experience of playing in an ensemble even for a short time will have been a happy and positive one for them as it was for me. Bravo boys and girls.! 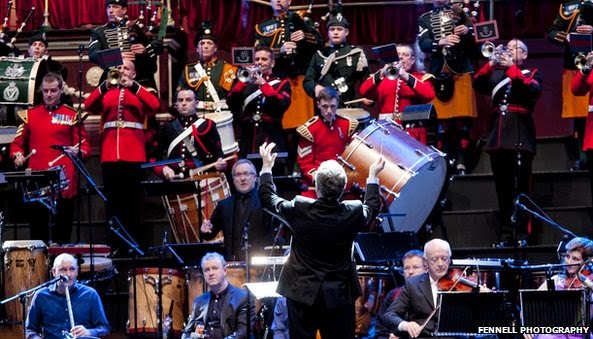 Looking forward next week to being in UCH Limerick as part of the orchestra for Limerick Choral Union's 50th anniversary.performance on Good Friday Tickets are going fast I hear for the sacred programme. of Mozart, Verdi and a new piece by Fiona Linnane and Mary Coll called Firestone. The soloists include Julian Hubbard, Opera Theatre Company young artist Gyula Nagy, Limerick mezzo, Sarah Ellen Murphy and soprano Franzita Whelan. The orchestra began to take shape at today's rehearsal under Malcolm Green.