Avignon  Cinq Spectacles at  le OFF

We arrived in Avignon on the eve of the annual garguantan theatre festival  . The Provencale city, famous for its Palais des Papes  and a bizarre bridge becomes a powerful magnet for every theatrical  and musical troupe in France and beyond it seems as the city is transformed into ‘le plus grand theatre du monde’ for three weeks in July. Like Edinburgh, the city is host to an official festival with large scale entertainments and a sprawling fringe festival.  My focus was on the fringe festival  known as  le OFF. During le OFF, the city host to 1,200 separate acts with something in the region of 12,000 performers  crammed within its walls during the three week festival , most of whom seemed to be promenading about in their costumes at all hours of the day or night in an effort to attract any undecided punters to ‘aller a leur spectacle’.  There appears to be a theatrical space  on every street and any venue satisfying basic minimum requirements can be transformed into a performing space.

First stop was the tourist office, to grab the programme of telephone directory proportions and then began the arduous  process of sifting through the offerings to devise a plan of attack, thirsty work requiring some glasses of rosé while  weeding out the Moliere from the Music Hall.  As it was officially the eve of the festival, most of the shows were listed to open the next day but most were offering free admission to the dress rehearsals.  So having disregarded any purely theatrical offerings as my French is not up to it or one man shows, here is my selection of the spectacles I saw at OFF 2012

1 On Friday at Palais Royal I was enchanted by the Poubelles Boys who have fashioned a highly entertaining song and dance show, En Chantier’  using items readily available at any builders providers outlet. Pure music hall in style, featuring slapstick comedy with the usual straight man format augmented with a duo of funny men who sang , danced and produced such amazing sounds from scrap heap materials that I found it hard at first to believe there were no backing tracks involved .  We were entertained in the fil d’attente by a German jazz quartet , who in a  reversal of theatrical order  had an impressive selection of real instruments including  upright piano on wheels and acoustic double bass. 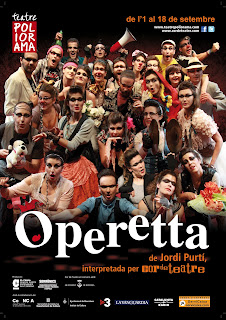 210.30 on Saturday morning might seem a little early to hear opera singers at their best but I was mesmerised by Operetta from Catalan Company , Cor de Teatre at Beliers Theatre .  A large cast by OFF standards featuring 25 singers, the show was a jukebox melange of opera arias and hilarious theatrical humour.   In a novel  opening, a cast member enters bearing a piano on her back, from which the rest of the company gradually emerge and eventually retreat back into at the finale . In between, we hear popular arias interpreted in a series of hilarious theatrical sketches. Bellini's Casta Diva is delivered as mini biopic of Callas unfolds, Traviata’s Drinking Song becomes  a shambolic dress  rehearsal and the Habanera from Carmen is accompanied by a coughing and sneezing ‘audience’.  I loved the simplicity of the company mimicking an orchestra in the William Tell overture and the transformation of the company into a cycle  race pack and entourage was perhaps the funniest  of all. Not everything worked for me .   An aria from Samson and Delila was just too lovely to  fit the heavy ballerina sketch and the bobbing chorus in the number from Tannhauser made me feel a little seasick. The  company appeared to be hugely enjoying themselves on stage . This was by far the most entertaining show I have seen in two years at OFF and ironically although a piano is a featured prop the singing is entirely acappella . Sometimes simple things are best. 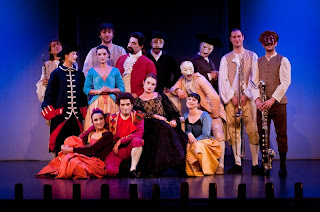 3 A Marriage of Figaro at Petit Louvre was a little too Beaumarchais and too little Mozart for my poor grasp of declaimed French. The  theatre company Comédiens & Compagnie was, I assume very much in traditional Commedia dell'Arte syle and featured very fort voce delivery,  white faces, masks and seemed a little long at over an hour an a half without a break. 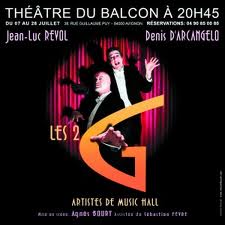 4 A nostalgic show that openly declared its allegiance to Music Hall was Les 2 G featuring  Denis D’Arcangelo and Jean Luc Revol as Georges and Gaétan  , two music hall  artists presenting their farewell concert and while I couldn’t follow all the dialogue, there was sense of great charm and excellent showmanship  and they evoked memories of Morecambe and Wise. The was a  familiar number How Much is that Doggie in the Window en francais of course in a series of songs on a  canine theme. They were wonderfully well supported by two musicians on piano and accordion . Even for an anglophone there was plenty to enjoy. 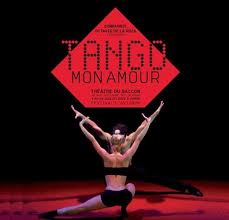 5Tango Mon Amour later at the same theatre de Balcon, was the disappointment of the day .  Although billed as a tango a trois, two performers, Octavio de la Rosa and the wonderfully alliterative Camilla Colella both 'far too sexy for their shirts'  danced at rather than with each other  in their undies  for a tedious hour  long presentation and it was far too’ imaginative ‘ to feature too much of anything as clichéd as classic couple dancing and a decent frock.  They seemed to have borrowed a few buckets  from the Poubelles boys which in lime green plastic  took the look off their monochrome theme somewhat. Interesting to note  that the backing track featured Kirsty McColl’s version of Libertango.

5 Finally before leaving on Sunday, I caught a charming and funny show ‘Mon Violon s’appelle Raymond’  in one of the spaces of the Palace Theatre . I had some misgiving about this one as it was billed as a one man show  which I usually avoid so I was delighted to see two performers on stage   with straight  man Jean Claude, pianist  as foil to funny man Kordion Heretynski on violon. Like the 'Operetta' we got lots of well  known numbers from a number of genres together with mad cap humour with parodies of Richard Clayderman and Andre Rieu wrapped up in virtuoso musicianship .

There were some familiar shows from last year's programme with Road Movie, Cello Sur Canape and Beethoven ce Manouche all featured again this year


Reading the local press reports, there seems some concern at the continued expansion year on year and the extent of the  festival is somewhat overwhelming. The sheer logistics of programming and marketing must be challenging.  I can report that two Irish acts featured on then programme although not due in town til later in the festival. They were chanteur Peadar King from Inish Boffin  and John Scott, Irish Modern Dance Theatre.    There were some shows in English but only one company from the UK was listed in the fringe , no doubt the draw of  the Edinburgh Fringe Festival at the opposite pole  of the Monde Theatricale proving an equally magnetic draw for those North of the Channel.

See my guest blogger's review of Master and Margerita at the official Festival d'Avignon
Posted by Cathy Desmond at 8:29 AM