'Shatter the printing-press.
Make each new book a precious object
written on skin.'

There was quite a buzz in the  Grand Theatre de Provence for the much anticipated new opera, Written On Skin, in English  by composer George Benjamin and librettist Martin Crimp  trailed as a new contemporary masterpiece.
The plot taken from an ancient local fable* is described by Martin Crimp on the publisher's website thus;

‘A rich landowner invites an artist into his house to make an illuminated book. He wants the book to immortalise in pictures both the violent operation of his political power and his peaceful enjoyment of domestic order – embodied by the humility and child-like obedience of his wife, Agnès. But the making of the book becomes a catalyst for the woman’s rebellion. After her first successful experiment in seduction, she exploits her new intimacy with the illuminator to influence the contents of the book itself – forcing her husband to see her as she really is – and laying the ground for an extraordinary final act of defiance.’
(Martin Crimp). 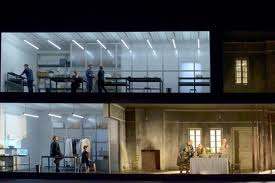 For the telling of this unremmitingly bleak  tale of the power, passion and oppression, the stage design uses a device of a two tiered set  divided into several chambers . There is a fracturing of time frames with honeyed  lighting and medieval costumes for the 13 century retelling contrasting with the flourescent lights and monochrome research lab setting of the contemporary chambers.  The characters, the main protaganists are joined by 'angels' and four other extras in modern dress who move between the spaces and busy themselves with scholarly tasks simultaneously with the main unfolding action of the bleak tale.  While this means there is always something to look at, it is distracting and it does rather diminish the shock of the murder somewhat when the victim appears upstairs, nonchalantly ambling around a few moments later in the 20th century. Strange  also is the device of the characters singing about themselves in the third person despite there being extra singers on hand to do the work of narration . 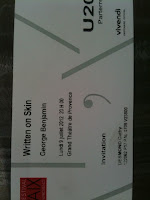 A student of French composer Messiaen, Benjamin's  orchestration delivered by the full scale  Mahler Orchestra is very interesting, a constantly changing palette supporting the on stage action. Unusual elements in the pit were Harmonica de verre (GlassHarmonica) and Bass Viole de Gambe and mandolin. For such a bleak and sexually charged tale there is much use of woodwind and brass bass timbres in dramatic moments. Of the cast, for me, the countertenor Bejun Mehta is perhaps the most compelling voice. One can believe it is the voice of an angel  and the duets with soprano Barbara Hannigan are beautiful. Baritone, Christopher Purves* as the Protector sings so well, you can't  hate him too much despite his unsympathetic role.
In contrast to last years' perfunctory applause following a production at LArcheveché, last night's performance was greeted with sustained applause and there were about half a dozen curtain calls and a standing ovation for the nine strong cast, joined on stage by Benjamin and Crimp.
Among the capacity house at this relatively new space was the conductor Charles Dutoit. The verdict of the post show cognoscenti?- Moderne, mais bon!

We found it tricky to locate the venue which is in the modern  commercial district of town. Arriving at the office at L'Archeveché Theatre, no venue map was available for the festival and it was a hot and sticky walk to the Tourist Office to get our bearings. On arriving early at the theatre, I could find no obvious entrance as  the entrance is concealed behind circular metal  metal gates which open one hour before the performance.  This is not a space that lends itself to lingering in for  apres opera chat and  within fifteen minutes of final curtain call, the audience had cleared the theatre and moved to the attractive circular space contained within the gates.  Legroom was not generous and taking your seat in the centre of a row minutes before curtain up was a bit of an effort.


*Tickled pink to read that Christopher Purves sang with Harvey and the Wallbangers, a band I remember seeing in the Shaw Theatre, London in the early 80's


The opera will be screened live tomorrow 14th July at 4.00 GMT Link here  It will be available for a few months.