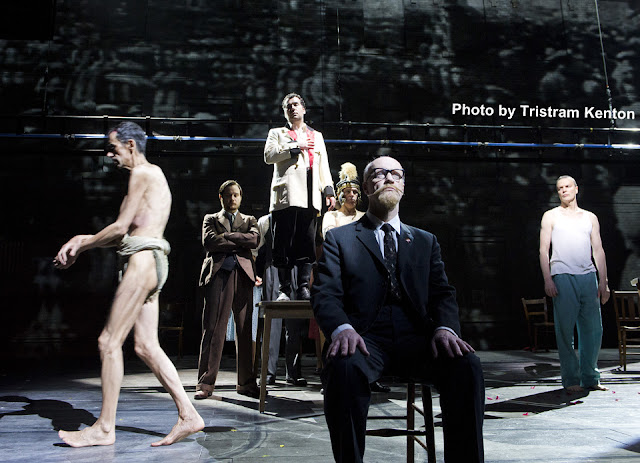 The spectacular courtyard of The Palace of the Popes in Avignon was the  backdrop for the extraordinary production by Complicite of The Master and Margarita. It marked the opening of the Official Avignon Festival that runs for 3 weeks in July each year. The performance is a sell out for the run.  It played without a break for just over 3 hours  to 2,000 people. It was quite a feat of ambition to stage such a play in such an arena. It worked.
The drama written by Edward Kemp and director Simon McBurney is  based on  the Russian,  Mikhail Boulkakov’s novel of the same name.  The book was written in the 1930’s and is allegorical opus that blends thinly veiled references to Stalin and state control of its citizens with God & the Devil. How the novel  saw the light of day, including the fact that his wife completed It  is a story in itself. The programme notes describe it as ‘Bulgakov’s poetic, political maelstrom of a novel’. The queue to buy the original work after the event was revealing.


The giant 30 metres, or so, courtyard wall of the venue was the canvas upon which high quality video projection was deployed to support the action in the most creative ways. Think attending a giant outdoor 3D movie where the dialogue and acting was by real people.
The sound was extraordinary  and one of the stars of the night from the  noise of a door creaking  to the teeth jarring squealing of tram cars resonating and echoing within the confined space of the auditorium. It created  the increasing threat of menace as the one dastardly deed followed another.
The plotline concerned a novelist who has written a manuscript involving Pontius Pilot and Jesus Christ. The novel’s conceit of Pontius Pilot adjudicating on Jesus is then woven throughout the drama. The Devil dominates the evening.  At first,  he is played as a Stalin type figure who deploys his henchmen to murder and incarcerate ordinary citizens. He then  reappears in the Pontius Pilot and Jesus story  and participates in the good versus evil debate.
The human element to the story concerns the novelist who has written a book about ‘mercy’  and  falls in love with Margarita. She calls him the Master   after reading the work. He is incarcerated in a mental home where we see a Kafkaesque scene of attempting to prove sanity.
Along the way there were beheadings, a foul-mouthed cat, galloping horses, a hanging,  a crucification  and lots  of other grim and philosophical bits. But hey!, it deals with tough times and lfe and death issues.
Paul Rhys as the Master and the Devil was outstanding.   Cesar Sarachu  played the sympathetic and gentle but persuasive Jesus Christ.


The play was directed by Simon McBurney and has recently finished a run   in London.