A Night at The Bavarian State Opera

We travelled to Munich on Stephen's Day and stopped off in the Bavarian capital for a couple of nights. We arrived late in the evening in an unusually  quiet city and we were disappointed to see the shutters drawn everywhere including  in Voglers , our favourite jazz venue.  The following evening we enjoyed a production of La Boheme  at the magnificent opera house.  As the performance was sold out punters hovered hopefully on the steps hoping to snap up returns some bearing cards saying "Besuchen Karten" which added to the air of anticipation .  The Bavarian holiday audience were a very well turned out lot with lots of  family groups, children on best behaviour,  women in party frocks and men in Austrian style wool suits and lots of people changing out of Winter shoes for something more elegant to promenade around the magnificent mirrored and chandlere bedecked  spaces.

Rudolfo (Stefano Secco) and Marcello (Levente Molnar)  set the scene and are shortly joined by Schaunard (John Chest) and Colline (Christian Van Horn).   Mimi duly appears with her unlit candle and the Anja Harteros is vocally splendid as befits the first if not only German winner of Cardiff Singer of ther World. While both leads are vocally suited to their roles there are some physical aspects of their stage presence that cause some logistical difficulties and two steps of the stage garret set are required for Rodolfo to clasp Mimi to his manly bosom. 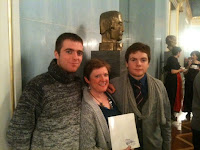 The cafe scene is beautifully staged complete with marching band and Clarecastle tenor Dean Power  makes a brief appearance as Parpignol the toy seller pushing a cart laden with musical instruments and pursued by  a chorus of children.  Anna Virovlansky is suitably coquettish as Musetta  and she and Marcello (M, olnar) make a convincing pair.


After the performance we make our way to the stage door to watch the dedicated fans wait for autographs.  All stop to chat and sign copies of photos which everyone seems to have brought with them. The conductor, Italian Marco Armiliato breezes through and we are a little surprised to see the stars disappear quietly  joining  the evening pedestrians on Maximillian Strasse. One imagines that there should at least  be a limousine or two to carry them off.

Posted by Cathy Desmond at 4:00 AM