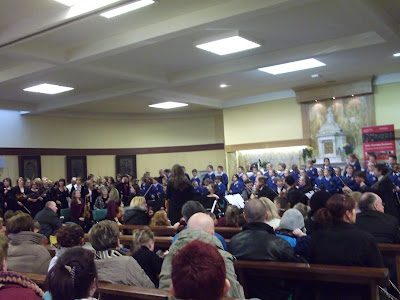 Although very cold and icy, I braved the elements to hear the Christmas concert offered by the Sing Out With Strings Programme running in primary schools in the Southill Area of the Limerick city.  I took every turn off the Roxboro Roundabout except the one I needed and the concert was in full swing by the time I arrived at the large modern Holy Family Church. The ladies and gentlemen of the  Irish Chamber Orchestra were in place and accompanying a childrens choir  in a set of engaging jaunty songs on a Christmas theme, directed  by Tony Hunter.
I heard two choirs and the group from St Mary's Boys School   certainly sang with great gusto.  It is so  encouraging to see a big group of boys in a choir instead of the token few in the school groups I have been familiar with .  The songs were the fruit of composition workshops run in the schools as part of  a choral strand of the project
Finally the string group took to the stage, the group comprising 40 or so students  and a large group of adults including   class teachers and several string teachers including Yuki Nishioka, Gillian Mott, Aine , Niamh Phelan and director Lisa Grosman and Kathleen  Turner herself.  The group played the first Suzuki variation on Twinkle in a call and response style and Jingle Bells with a pizz riff for the verse . They   looked the business.  I particularly liked the emphatic pizzicato in the verse part of Jingle Bells .

Katleen Turner Education Officer for the ICO said a few words, as did CEO of ICO, John Kelly. The church was a good venue for an event with several large groups; there was loads of room and the groups assembled and left the performing area smoothly enough. There was a  front pew of local dignitaries with a sprinkling of gold chains and there were several  press photographers, all of which  contributed to the buzz  around the event which is part of the Limerick Regeneration project. 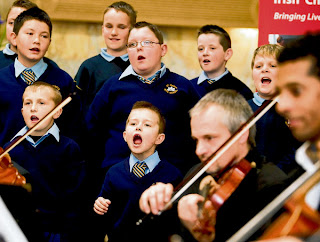 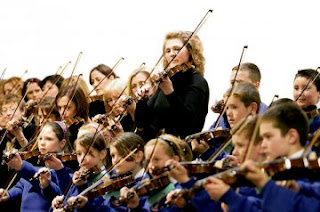