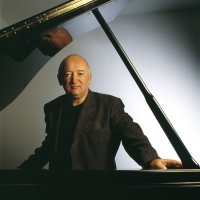 John O Conor gave a solo piano recital at Glór tonight. The auditorium was respectably full  and it was encouraging to  see a row of youngsters towards the front of the auditorium. In the absence of programme notes, the soloist gave very interesting and humourous spoken introductions to each set of pieces and this was added much to the enjoyment of the repertoire and demonstrated his excellent  communication skills.

The programme was laid out cronologically and one had a sense of the excitement of the new sound possibilities of  the romantic  piano  released by the Romantic composers,  Field and Chopin  following the briskness of the Classical  Haydn sonata.

The audiuence included many Ennis  cognoscenti, including Kieran and  Breda O Gorman of Clare Music Circle,  soprano Maret O Hehir, Archie Simpson of Lismorahan Singers and tenor Peter O Donoghue,  Mary Ellen Nagle of Clare Music Makers  , Marie Corley of Ennis Cathedral Choir and Terence Mangan  Governer General of the Lions Club  and his wife Maureen . I was delighted to meet my neighbours Veit and Rania Kuhn of Penguin Pianos who tuned the piano for the performance .


I do like it when performers come front of house to meet and greet patrons .  I believe John O Conor did greet many of the younger audience members  backstage but I believe  this very important aspect of the evening might be better  taking  place  front of house in the foyer or the red room. There were quite a few people hovering in the foyer who would like to have met the artist and reluctant to find  the route backstage,

John O Conor's  personal remuneration package has been under some scrutiny in the press this week and while his rather plummy D4 tones do rather set my culchie teeth on edge, I was impressed with him tonight  and enjoyed the performance rather more than I thought I might.  I think John O Conor , as one of the country's most successful performers and teachers ought to be well remunerated.

One quibble, as TV sitcom character Frazier might say, a  tee shirt is an undergarment, I feel a proper shirt collar is required for a  performance, but hey, call me old fashioned .
Posted by Cathy Desmond at 2:18 AM