﻿﻿﻿﻿
﻿
﻿ ﻿﻿﻿﻿
﻿
﻿ Is Music Worth Paying For? This was the question  adressed at this evenings cabaret/ debate at Dolan's Warehouse, Limerick. This format of a mix of music and discussion is new to me and has something of the spirit of a Renaissance Camerata about it .  We made our way in to the Warehouse which was a little slow to fill up. A Roma family occupied one of the top tables with a number of young children playing games. Eventually, a jazz quintet  made up of sax,  bass guitar , electric guitar,  f hole guitar and drums .  struck up.  They were very good but most remarkable was the presence of 12 year old Andreas Varedy who was just extraordinary, very accomplished and mature in his stage performance and wordlessly  taking his cue from the saxophonist. Later looking at him walking around with his skateboard , he looked like any other 12 year old and you couldn't believe he had just performed like a seasoned and mature  performer. I note he is from a Slovakian family. Coincidentally, we had heard another remarkable young Slovakian (Vladimir Jablokov)  musician at this venue less than a fortnight ago.

Paddy Cullivan of Tubridy's Camembert Quartet fame comes on with the 'Leviathan Archestra', keyboard  drums and bass guitar to do a set of very funny political songs.  'We Are Where  We Are ' and 'Put Your Shoulder to the Wheel'   very much up to the minute satirical songs exploiting some of the more innane utterances of the present political clique. 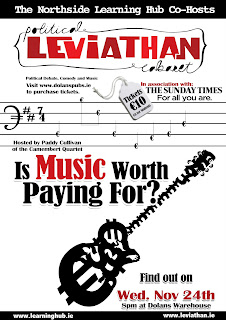 A short debate about musical education, or lack of it, followed with contributions form Ailbhe Kenny of Mary I Teacher Training Centre, Kathleen Turner , Education Officer with Irish Chamber Orchestra and James Blake of  Northside Learning Hub  generally extolling virtues of music in Education and pointing to a lack of a concerted national implementation policy.  There were some contributions from the floor , myself included and I quoted some figures from 2000 Music Network Report. I regret I forgot to mention City of Culture bid  by Derry includes proposal on inclusive music education.

There was a further debate mainly focussing on the downloading of music when the panel changed to feature journalists, a radio  presenter and   a musician with contributions from chairman Cullivan himself.  There was a lively debate from the floor with a contribution from Gwen Moore of Mary I concerning the ethics of free downloads which drew a defensive response from radio presenter Michelle McMahon. Mick Dolan himself spoke and seemed optimistic about the future of live music venues such as his own .  I do think this sort of multi faceted venue with accompanying  bar or restaurant  which can accommodate small intimate gatherings or larger gatherings with bands picking up extra revenue by CD sales at the venue is what will work in the future as opposed to larger dedicated arts centres which absorb large sums before they even open their doors for a gig .

I was delighted to meet  fellow violist , Trudy Gunn, and her husband David Blake there to support son James of Brad Pitt Light Orchestra.

A great night and well done to the Leviathan promoters for such an innovative event.
Posted by Cathy Desmond at 2:40 AM