Anything Goes at Colaiste Muire 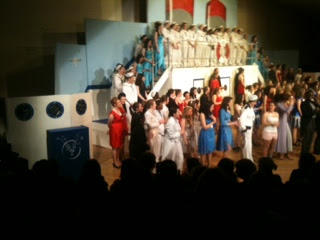 Last night was the final night of the four night run of the annual musical at Colaiste Muire . I love playing for  musicals and given a choice between a symphony or a show , I would choose the latter any day .  I joined the brass and reed dominated pit to add a string component to the band at Danlann on Chlair for the Cole Porter musical Anything Goes . This was a light and frothy production with much to admire. The string parts are not quite as lush as those for Kiss Me Kate, the last Cole Porter show I played for but there was plenty to get stuck into . The brass playing from husband and wife team , Dermot Gorman and Sharon Brooks was particulary well executed  I loved that wah wah muted trumpet sound and the descending line on trombone in title number.

The stand out performance came from Bilkees Saidi who demonstrated a poise and stage presence far beyond her years. I think this is not the first we will hear of this young lady. I laughed out loud every night at Caitlin Hamilton Jones whose comic timing  as Moon Faced Martin was pretty impeccable and quite a revelation. Siobhan Sexton was sweet and lovely as debutant Hope Harcourt and she wore those dresses so well. Madeline Arkins Heavenly Hop was one of my favourite numbers and the chorus including Alice Foley performed their dance routines with aplomb .    It is quite an achievemnent for a school to have mounted 25 continuous years of musical and I am glad to have been associated with 4 of the last 5 years with MDs Carmel Griffin and Michael Hennessy. 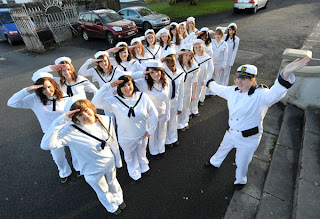 The sets designed and executed under  Niamh Ni Mhuirí was worthy of the West End and the costumes and particularly the dresses were such a riot of colour and so glamourous and worn very well by the young actresses.  Humour , great tunes , lovely dresses and a bit of tap dancing and all done under two hours -- a  perfect tonic for winter blues!
Posted by Cathy Desmond at 1:48 AM