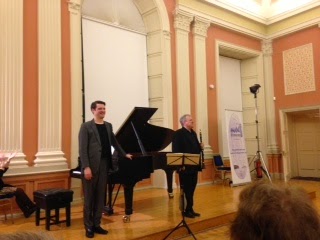 
Something rather special was called for in planning a recital in  memory of impresario John Ruddock, a great friend and collaborator of Waterford Music. It  has been a while since we heard the mellifluous tones  of Michael Collins in the South East. (He last played here in '97 with pianist Vanessa Latarche.)   On  Thursday night,  he returned with  pianist  Michael McHale to the Georgian Large Room. This superb team  gave us a memorable night of Romantic sonatas that exceeded any expectations and more that did justice to the occasion. As you would expect of these international artists, each player showed impeccable skill and virtuosity. Collin's lyrical tone  was so lovely, that we could have happily  listened to him playing scales and arpeggios at length . McHale made the house Steinway C sing broadly with it's  top up and at times barely hum.

The mainstay of each half was a Brahm's sonata, considered to be the first chamber works to fully exploit the range of colour of the relatively new instrument. The Undine Sonata by Reinecke, a contemporary and supporter of Brahms was originally conceived for flute and a beautiful work of varying moods with gorgeous melodic elements and the work I most wanted to hear again. The programme of work  all cut from the same musical cloth might in less skilled hands have proved rather dull. Not a bit. Such was the musical empathy and sense of gaiety between the two players, the exchange between the equal virtuoso parts was often thrilling and  never less than interesting. At the end of each movement,  Mr Collins face broke into a serene  expression of satisfaction and contentment and the broad smiles from both suggested that they both  relished every note of their lively musical dialogue.

For an encore, we had a bonus- a  'world premiere' no less of  an arrangement by McHale  of a Field nocturne for clarinet and piano which drew murmurs  of approval from the audience in the elegant Georgian Room City Hall. It seemed fitting  that a new red carpet was laid on the City Hall Stairs just prior to the arrival of the two Michaels on this memorable night of superb musical collaboration.
Most of the works in the programme can be found on an album (their 5th)  recorded for the Chandos label.

Among the audience were Carmel and Noel McHale, Michaels' parents who had travelled from Belfast to join the audience.

Q & A with Michael McHale   http://cathydesmond.blogspot.ie/2015/02/q-with-pianist-michael-mchale.html
Posted by Cathy Desmond at 2:45 AM