Books and Strings in the Viking Triangle

'What better place for a book launch than in the Palace of a Bishop who bequeathed his collection of books to the city'.  So said doyen of local historians, Julian Walton who launched  Eibhear Walshe's new book  in his customary erudite manner.  'Waterford is fast becoming the book capital of the South' he added. This is apparently the fourth book launch in the city this month .  Walshe is best known here for  a childhood  memoir, Cissie's Abbatoir and in academic circles for  biographies of 19th century literary figures.  This is his first novel set in the period and milieu  in which some of those figures  would have moved. 'The hurler has come down off the ditch' said Walton. The book is centered on the havoc caused by a notorious court case brought by Mary Travers and involving major society figures arising out of  her affair with Oscar Wilde's father. In  1864  it provided great entertainment for the prurient Dublin masses.  'Eibhear draws us with consummate skill into Mary's Traver's world with. constant allusions to sights sounds and smells of th 19th century a novel about real people and events'

Eibhear spoke warmly about the experience of learning about writing in his native city and  visiting the old library in O Connell Street, a space I remember visiting myself. He said it was his most enjoyable of his writing experiences to date.
The book is publishes by Sommerville Press in Bantry .

24 Hours from Tulsa: Visiting String  Ensemble at the Medieval Museum
After the launch, I moved to the Medieval Museum for a performance of a visiting ensemble all the way from Oklahoma. Mother and daughter team Jody Naifeh and Karen Harmon with cellist Amanda Hardy led  a group of seventeen string students from the Tulsa Honors Orchestra in a selection of Suzuki repertoire from Book 1 and 2  and some arrangements of Irish jigs and polkas. They finished with a piece by Karen inspired by Argentinian tango, a movement from a Brandenburg Concerto and Warlocks's Capriol Suite.
'It took us twenty four hours to get here' said Karen in an echo of the Gene Pitney hit. They are moving on  to play in Tralee, Connemara and Dublin. They will be in Christchurch Cathedral Dublin on Monday 30th June at 3pm and are delighted to hear from other Suzuki groups who may like to come and play with them. Here is their schedule.
Thursday June 26 at 7:30pm, 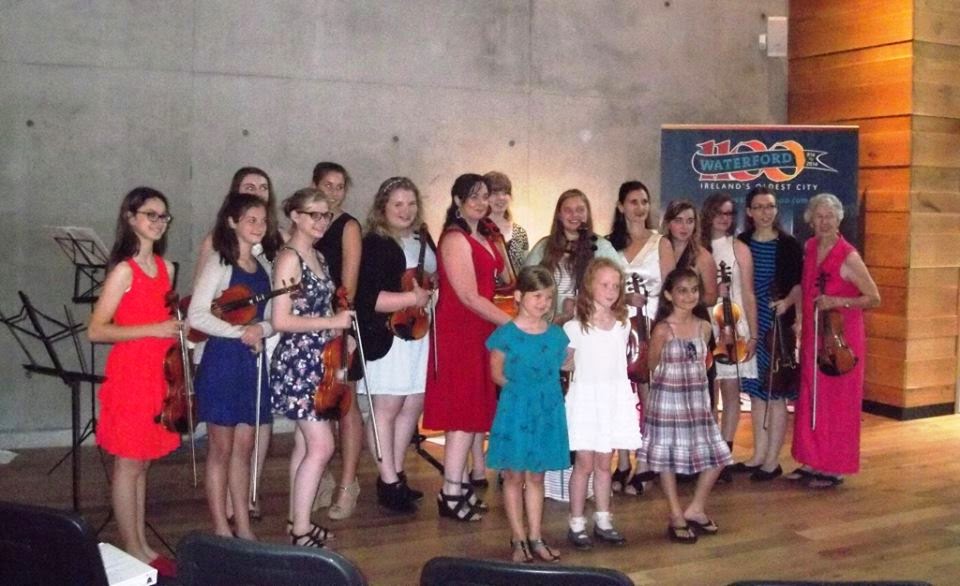 Posted by Cathy Desmond at 9:41 PM