Chasing the Blues in Chi Town 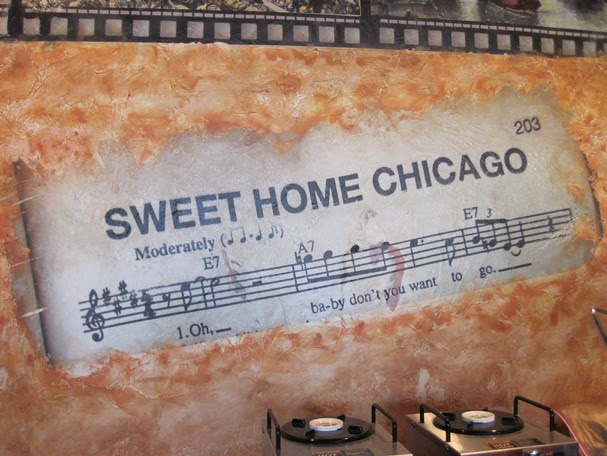 I just got back from the windy city. Chicago, the second city of the US. It's a helluva town as the song goes. The city downtown area is relatively compact and the attractive lakeside location gave it a seaside holiday air 'though the weather was on nippy side for the beach. At my downtown hotel, doormen wore overcoats and  fur hats to ward off the mid May chill and cheerful looking convention delegates milled around  the  lobby. Here are some of the highlights of my three day toddlin in Chi Town.

https://www.youtube.com/watch?v=Tlou_2lMLAc Hear the Blues version of My Sweet Home Chicago


Chasing The Blues    You can't come to Chicago and avoid the Blues  We headed to Kingston Mines on the North side where you buy beers by the bucket load and ribs by the slab.  On Saturday night , the joint was heaving. The music is a bit like the sauce, thick and sludgy, robust and addictive. Nonagenarian, Doc Pellegrino who started the joint almost five decades was in the house and welcomed the revellers. His son was MC clad in Blackhawk jersey for the evening, moving between two long performance  halls. We heard veteran blues guitarist Byther Smith who looked like he could double for BB King, sharply attired  in blue pin stripe and gleaming white shirt. We chatted to musician Rod from Michigan.

listen to ‘Byther Smith’ on Audioboo

Losin' the Blues   Comedy is a serious business at the theatre complex known as Second City out of town in the Lincoln Park area . Renowned as a centre of excellence of comedy improv , the venue hosts  performances , writing classes and all manner of activities.  A slick sketch show titled Depraved New World was based on material gleaned from improvised sessions and honed  for performance. The ensembles were slick, the comedy was sharp, witty with no gimmicks or crude vocabulary and the audience of locals was a mix of ages from young professional types to senior citizens.


Matinée in Belmont Theatre District
Much as I love the  Sound of Music which was  playing at the Lyric Opera House,  I opted instead  for a less familiar vintage musical    I took the red line to Belmont  Theatre District to seek out Stage 773, the Chicago equivalent  of Off Broadway .  You can read the Chicago Tribune review of Porchlight's terrific production of How to Succeed in Business Without Really Trying here    A lovely detail was the themed foyer space furnished with period props. 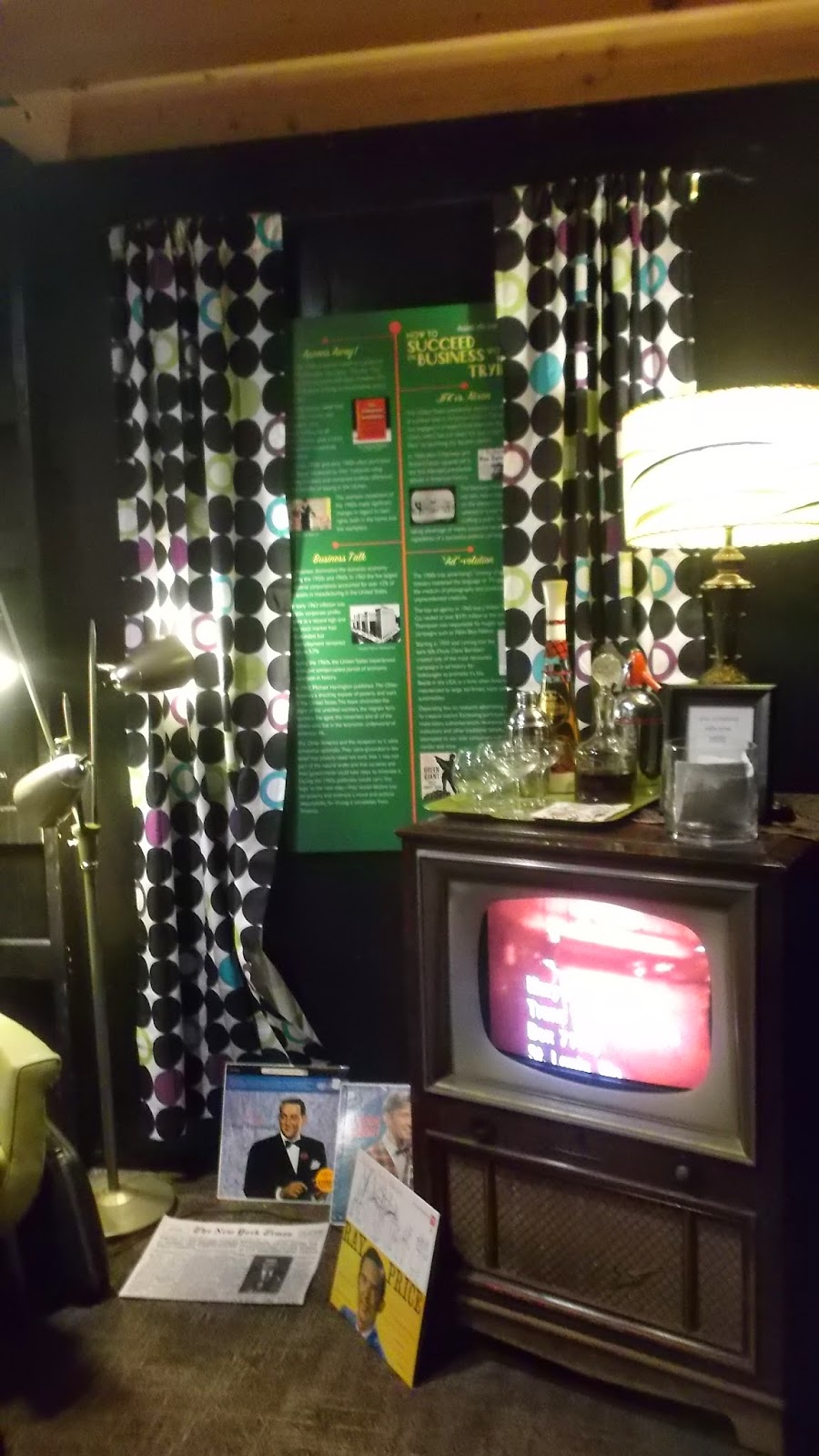 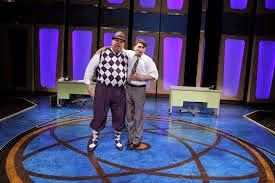 Salon Concert at IAHC  with Baal Tine and The Academy of Irish Music . Too much to say here in this round up . You can read an account of my visit to a  terrific event showcasing the musical activity at the Irish American Heritage Centre here

Best Buskers.  Buskers abounded on the public spaces. The sound of a marimba cast quite a spell over the path outside the Chicago Cultural Institute. If you don't feel up to the Chicago Fine Art Gallery, you can visit this centre for free. It is worth it for the amazing dome As I passed through guide was pointing out thye names of authors of antiquity engraved on the ceiling alongside the names of 19th century authors who would have been contemporary when the Institute was built. 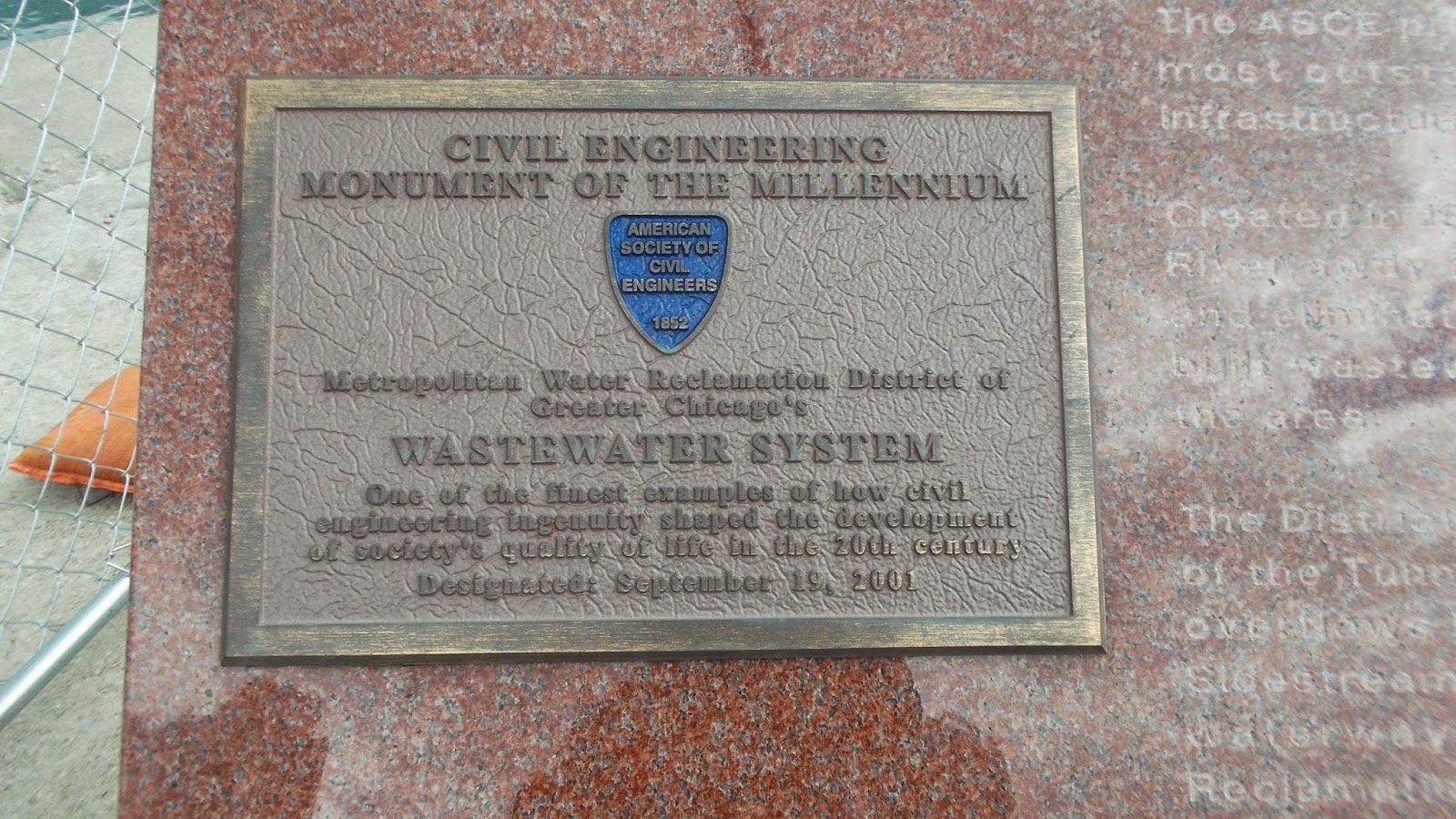 Civil Engineering Monument of the Millenium to Chicago's Wastewater System : A tribute  to gladden the hearts of civil engineers everywhere. Spotted on the River Walk,  the plaque reads  'One of the finest examples of how civil engineering ingenuity shaped the development of society's quality of life in the 20th century.


Sunday Morning Service: There was just time on Sunday to attend  a church service. The Presbyterian Church on Michigan Avenue was celebrating it's centenary and offering a tea time jazz service. In the Holy Name Cathedral, a professional choir added contemporary works by Jonathan Dove ,Ubi Caritas by  Paul Mealor, an Elizabethan motet by William Byrd   to simple congregational hymns. You can hear a little of the organ postlude on the audioboo.
Impressive as the music was, the detail that I recall  is the clarity of the diction and care taken with the spoken word. More on music at Holy Name Cathedral,  Chicago  here


listen to ‘Holy name postlude Chicago’ on Audioboo
A friend  sent me these  comprehensive travel notes which I include below in the hope they may prove useful to other travellers.

The truly great city of Chicago is know as Chi-town and not the Windy City. It is known for its sport and music culture and great shopping and of course food and history. you need to know that the song of the city is Sweet Home Chicago

It's easy navigate Chi-town
1. You are either North of the river or South of the river and the lake is to the East of you - think East coast of Ireland.
2. The big streets run North to South and the two most famous are Michigan Ave ( which is more on the North side)  and State Street  ( which is more on the south side ) but both are parallel and just three streets apart.
3. You will hear of the part of town called the Loop which is called that because it's the loop that the subway takes - the subway is called the Elle or L because it is elevated in parts of the city
4 you have Greek town and Little Italy and of course the River North as well not to mention Chinatown

The Hard Rock is also an interesting hotel

Overview
Everything that you want is downtown - all within easy cab rides I can't imagine you spending anymore than $ 6 to $ 10 dollars for any trip downtown. everything is accessible and hotels are noted for their friendly staff . no need to book any cabs as they will have them at the ready - no trip is too short either.

Food
Eating out is or can be expensive but top quality

Breakfast is big and also kinda costly - I either go for it or a midday brunch - try South Water. Kitchen on Wacker and Wabash part of of the Monaco hotel as a treat . Comfortable bar and restaurant.
the Sunday Gospel Brunch at the House of Blues is worth it but need to book it in advance.

Chicago Steaks are just great and you are spoiled for choice with Morton's , Smith and Wollenskys  and Fultons the very best to be                 found anywhere  - Any one of these a must and all near the river and the hotels I suggest above

Marrgiano's is a classic Italian - can't be missed but you could also try Harry Caray's on Dearborn - he was a famous baseball announcer - really busy and buzzing place
Nicks Fish Market  is among the best fish spots - the waiter giving you the menu specials is sufficient - after that you are full!!!!!

; Billy Goats Tavern really can't be missed as it's the inspiration for Saturday Night Live - it's a burger - cheezeboorger joint - no fries - just chips - it's a bar underneath - yes underneath Michigan Ave. ASK anybody - it's innocuous but a Chicago classic - walk in the door and get confronted by a mad Greek telling you Cheeseburger are good but double cheese is best,; Ed Debevics is a classy 1950/60s fun spot  - watch the staff dance on the bar every half hour or so. Be ready to be insulted !!!!

; Hancock or Sears - now Willis tower - either will do - I prefer Hancock though it's smaller - slightly
; The Field Museum - home to SUE the T Rex
; The Art institute of Chicago - classics including the famous Seurat and American Gothic
; The Museum of Science and Industry is brilliant too -

They re all within easy reach and close by each other - I would also recommend the. Adler Planetarium which is close by as well on a linger trip.

At this time of year you could take the river cruise which is a history lesson about Chicago - relaxed - and informative - did you know the Chicago River had its flow reversed !!!!! .

Music
You are spoiled for choice here - I just love the following places but there are spots down Rush street and almost any street you care to mention.
1) Buddy Guys - he might even be there himself the great man - a short taxi away
2) Blue Chicago on Clark street. I have had some great nights there - I actually think. Thursday night is a great gig
3) House of Blues can be really good too - there is a bar there and food not bad and some minor acts during the early evening - it's situated right under the two big Corn on the cob towers - beside the SAX Hotel

COMEDY show
The Second City Comedy Club is also a must - the inspiration and where almost any comedian who is a comedian started.