Soaking up the Bachmosphare in Leipzig

I am in a  spartan  Lutheran  pew at 9.30 in the morning in a swish Saxon suburb  with the whole works - a four part choir in concert dress with  soloists and orchestra. working our way through some solid choral fare as part of the festival  Matins service. Yes indeed,  the Leipzig Bach Festival  held annually in  honour of their famous resident, one Johann Sebastian Bach  is a earnest, solid sort of festival, not for the faint hearted. German audiences it seems are accustomed to long sits. Intervals if they happen at all tend to be brief and when it comes to a spot of congregational singing, they sing all the verses.
Over the ten days or so more than a hundred concerts are scheduled in venues around the city. The festival overlaps with the Handel Festival in nearby Halle.  You can read my experience of a day at the Handel FestSpiele here
This year's title is 'Die Wahre Art', the True Art and there is an emphasis on the work of  best known of the Bach's sons, Carl Philipp Emmanuel in the 300th anniversary of his birth. The title is taken from one of his essays on how to play the keyboard. There are  lectures, seminars, excursions and a children's programme .  A less solemn face of the festival is offered by the Bachmosphare, a weekend of free live music and  screenings when the central market square is converted to an outdoor cabaret venue. When I arrive on Sunday, a jazz group are mixing  strains of Led Zeppelin Stairway to  Heaven with Bach's famous Air in G.  But the real jollity factor is injected via the proliferation of open air tv screens in  pavement cafe's where punters discuss performance aesthethics  of football and crumhorms  as this year's festival coincides with the FIFA World Cup. Excellent programme  notes gave English translations of all the texts and  overview comment.

Although tickets for the headline  events are pricey, day tickets were available at €10,  15 minutes before start time of the evening concerts in the church venues.


BachFest105  Friedensgebet   at Nicholaikirche. The weekly 5pm  Monday gathering at this church is  credited with playing a pivotal role in the peaceful political revolution against Communist rule in East Germany . Although it no longer draws the crowds it did in the 90's, the weekly vigil goes on.  This is the first year that this event has been incorporated into the Bach Fest. It included a contemporary work for saxophone organ and drums. It  opened with the choral work Allegri Miserere and a there was rather long  sermon.

The Canadian period instrument ensemble was the resident ensemble of the ensemble.  Best view was in the upper gallery and the programme presented a selection of solo concerto and the related concerto grosso in a lively performance

Concertprobe Academy of Ancient Instruments:   Richard Eggar and Malcolm Bilson were the twin  harpsichords . The church was open for onlookers to the morning rehearsal.

BachFest 47: WW1 Compositions  Grassi Museum  After the muted timbres of the period instrument bands, the modern instruments sounded rich and sonorous.  This was the second musical evening devoted to music composed in WW1 that I have attended recently  I was struck by the divergence between the popular music of the time and the programme of avant garde work by Schoenberg and his contempories. You can read my report on Oh What a Lovely War a programme of popular music of from the Great War here 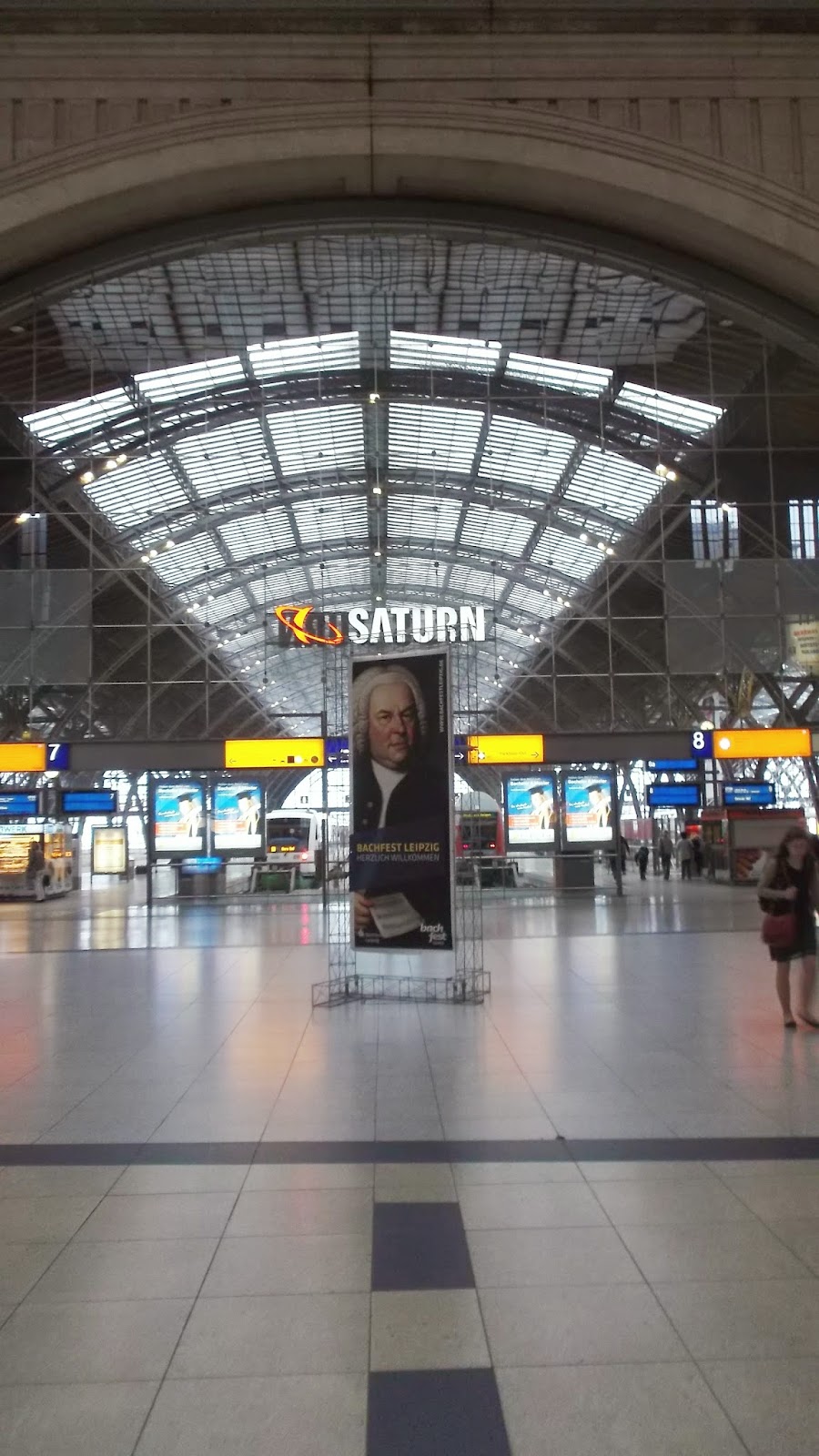 BachFest 49 Matins at Peterskirche inc BMVIn allen mein taten. Presented as part of a series of daily Matins services, the performers from Die Evangelische Hochschule for church music in Halle.
Bachfest 54: Chorwerke at Thomaskirche: This in the very solemn space of the church most associated with Bach. The programme  included Bach Cantata  Weinen, Klagen Sorgen Zagen, and a  Donner (Thunder)  Ode , a work in memory of a catastrophe when in 1755, an earthquake off the coast of Portugal destroyed the city of Lisbon. Hamberg had strong trading links with Portugal and the City Council commissioned the work from the City Music Director, Telemann. It went down so well that he wrote a second part the following year. We heard both parts which had parts for not one but two basses which together with timpani rolls created the thunder rolls of the title. Even though this was a performance and not a constituent of a religious service, it had a devotional atmosphere with the Gewandhaus Orchestra and Thomanerchor placed in the Gallery behind the audience. I was reminded of the TV pop singing concert where the judges sit with their backs to the performers and turn when they hear the 'xf actor'. The two thundering basses had many heads turning in the pews for the no 7  duet for two basses  Er donnert, dass er verherrlichet werde.  He thunders that he may be glorified

Unfortunately my visit didn't coincide with any of the  events at the Gewandhaus Concert Hall so a visit to the home of the oldest European Symphony Orchestra remains on the  bucket list. IThere were some events at the Leipzig Opera House including a German language version of My Fair Lady. I left before a much talked about production of a Strauss Opera opened there. It hit the headlines when a critic referred to to Ms Piggy  in his unflattering critique on the soprano Jennifer Ann Wilson The soprano gave a wonderful response on the Arts Journal Slipped disc .I  quote  it here. Bravo Ms Wilson!

Dear Norman,
I am delighted to be mentioned in the same breath as the magnificently gifted showbiz icon, Miss Piggy! Please send Herr Scholz my most heartfelt thanks.
All best,
Jennifer “Miss Piggy” Wilson
PS – and don’t forget it, Kermie!
- See more at: http://slippedisc.com/2014/06/oh-not-again-critic-calls-an-opera-singer-miss-piggy/#sthash.UEqEAYK6.dpuf


Getting There :  From Ireland your options by air are to fly to Stansted and take a Ryanair flight to Leipzig (Flightsare  on alternate days).

You can fly out of Shannon Monday and Friday  and most days from Dublin  to Berlin and get a train or bus to Leipzig. Bus time is 2 hours.  Train is more expensive at €29 Bus is as low as €8 booked online a day in advance
Having done the journey several ways, I would avoid the spirit sapping Stansted.  You are required to go through the arduous queueing process for security a second time and it is choc a block during the Summer. I fllew back via Berlin Schonefield. . I took a bus from Leipzig to SudKreuz Station , Berlin . An  S 46 SBahn takes you to the to the airport, journey time half an hour. Ticket was €3 or s. Don't forget to validate your ticket before you get on the S Bahn .

Where to stay. It is  hard to pass the Motel One budget chain which is all over Germany .  The one in Leipzig has a great location  directly opposite Nicholaikirche but is frequently fully booked.  There is very handy Ibis on Goethe Street both walking distance from Hauptbahnhof. Both are under a €100. I have also stayed at the Schlafgut Pemsion which which was half the price but tends to book up quickly