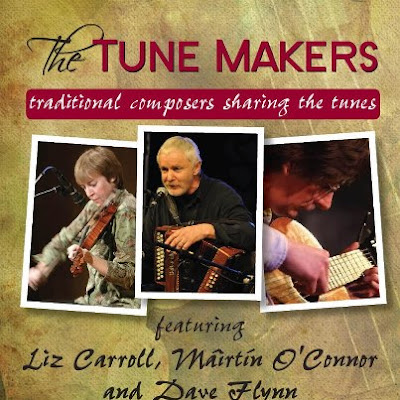 
It seems there is a trend towards trios in trad circles recently with  a pivotal Martin  Hayes forming a third of Triúr and The Teetotallers. One of Hayes collaborators, composer and guitarist Dave Flynn has assembled a trio of heavy hitting musicians noted for their tune crafting abilities.  The Tune Makers are currently on a national tour of arts centres  and I heard them tonight at Glór Ennis.

The format was similar to that of Dán's recent performance at the same venue. The three strands, here individual  players, in turn introduced and lead a set of newly composed tunes,   including a mix of air, slides  jigs, reels and strathspeys  finishing with a splendid Latin American flamboyant creation of Martín O' Connor, demonstrating dazzling virtuosity and unusually, exploiting the left hand buttons on his accordion.

Carroll played with great exuberance that begged for dancing feet rather than respectful silence, her style owing more to the Northern tradition with economy of bow stroke and triples. A mellow fiddle tone combined with a very pleasant on stage demeanor, she  drew her audience in with good humoured  anecdotes and asides in a clear soft voice. You couldn't help but like her.

Following the interval Flynn was joined on stage by Tommy Peoples . A senatorial Peoples (newly elected to Aosdana) stole the show with his moving rendition of Gerry O' Beirne's song (see above) which he sang with great feeling adding interludes on violin and was for me, the highlight of the evening. They are on their way to Dublin  and  the Cork Folk Festival. A good evening. I felt that at three hours including interval and encores, it was a tad overlong for most punters.

Venue Notes
***The Tune Makers had been on this stage as part of  last week's Culture Night event and might explain why the audience for the evening was less than might have been expected given the stature of the performers.  I would love to have seen and heard the players released from the barriers  of the fence of microphones and placed closer to the listeners. Given that the percussive effect of plastic wrapping was clearly heard and string quartets usually perform here unamplified,  perhaps with the musicians placed on the floor near their audience, an unplugged performance  with a mike for vocals for an audience of less than a hundred would be feasible.


Related articleshttp://journalofmusic.com/radar/tune-makers-tour
Posted by Cathy Desmond at 1:42 AM