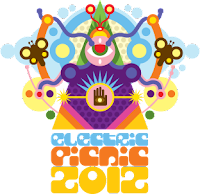 
The sun made a prolonged guest appearance on Sunday at Stradbally, Co. Laois for the annual open air music festival tempting me to make my first foray to the Electric Picnic. Was it fantastic?- an envious pal enquired ? Well-- like the proverbial curate's egg,  Yes and No and good in parts

Yes: the grounds are beautiful and the site is impressive in scale, incorporating several distinctly themed areas. A crescent of big top tents is the first sight you see on entering, not quite so vital or tempting when the sun is shining but cheerful none the less.  Very pleasing on the eye also are the giant garden features  dotted everywhere amongst the plethora of performing spaces giving  the site a theme park atmosphere . You can have a massage, hang out in the Gameletron or watch dancing waiters in the Hurly Burly Cafe in the Body and Soul area  and I liked  the 50's themed Trailer Park presided over by giant wicker foxes.

I spent the early part of the day in the Mindfield, a  cosy collection of small tents devoted to the spoken word. A frivolous Sunday morning panel of RTE chat show folk in rather  un-pc weekend banter mode was actually more fun than I would like to admit and at least, Colm O Regan, creator of @Irishmammies, twitter phenomenon and Des Bishop's distinctive hybrid tones diluted the Dublin 4 ones a tad. Dublin Gospel Choir in the Hot Press Tent were charming but star of the Mindfield was Druid Chef Rory, Morahan who  extolled the virtues of Celtic Cuisine as Gaeilge with great gusto while cooking tasty bacon and black pudding treats. Maith an fear thú Rory.


And the bad? Well while there was no mud and the ground was delightfully firm under foot,  gloop of a different kind manifested itself from early in the afternoon as  the aural equivalent of mud, a relentless loud drum beat like opressive thunder,  pervaded the atmosphere  quenching  less robust sounds.  The wonderful veteran songwriter's Van Dyke Park's lovely delicate piano playing was masked and his vocal introductions barely audible .  Even the folk quartet LAPD with heavyweights, Irvine, Lunny  Liam Og and Paddy Glackin were no match for the aural sludge. As I was driving  away, Barry Egan was musing on Today FM how Paul Buchanan's soft gentle piano backed vocals fared given that he was on at the same time as the Killers. Well Barry- it wasn't the Killers that murdered  Paul's set in the Dingly Dell but the ogre of a heavy pulsating beat  emanating from pair of dance tents  incongruously located in the heart of the Body and Soul area.  Not very Zen at all ! There was no escaping the boom-boom  as the audience fled to to the front of the Dingly Dell Stage

No delicate vocal lines to worry about on the main stage as the  Killers had the crowd on their feet and singing in unison as a proliferation  of laser beams lit up the night sky , a feat Elbow in the  twilight  hadn't seemed to manage.   Finally at last, midnight and  time to go but there was one surprise left. On the way out, we were drawn to the lively rhumba rhythms coming from the Cosby Tent.  Closer inspection showed that most of the Congolese group, Staff Benda Bilili were in wheelchairs or on crutches.  Overheard as we left, 'best gig of the whole weekend ' a punter remarked. Hear Hear!


Overheard at Electric Picnic 'The scallops were huge!'
Posted by Cathy Desmond at 12:22 AM