Liz and Lar by Paul Barry at Garter Lane 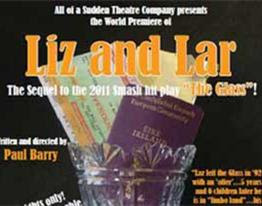 Paul Barry premiered  his sequel to The  Glass this week in Garter Lane.  His first play traced the working lives and loves of a bunch of Waterford factory workers against the background of the slow decline of the crystal business. This production, again is from,  All Of A   Sudden Theatre Company. It's wonderful to see another  new work hot on the heels of the Red Kettle recent premiere.

Of the many colourful characters in the very funny The Glass the most memorable was Lar Power  the life and soul of the ensemble. It was inevitable there would be a sequel. We wondered how life had treated him?


The new play, Liz and Lar, brings a different Lar. Firstly, it's played by a different actor the excellent Fionnan Dunphy  and secondly, life has moulded him. He's now unemployed and embroiled with the dole office over his 'few pound' . He spends  his day at the kitchen table taking  care of routine household chores allocated by his wife Liz and hosting a succession of visitors. He is a kind of Waterford everyman.  Liz is played by Anne-Marie Collins in a a fine performanc. She  is tired of being a human incubator, 6 down and one to go!


The second half had a better   tone. It's set in a hospital ward after our man suffers a mishap in a certain named doctor's surgery following  a discrete procedure. Terry Grant plays an hilarious cameo role as Lar's friend who is a combination of gossip and unreliable medical reporter (ignorant cyst and grout!).

Barry constantly mines the glass factory for much nostalgia and memories and clearly he  has much to say on its demise. It's wonderful to see a play peppered with everyday Waterford City references; Doyle St, Johnie Walker's chips, Billy McCarthy's voice and Ballybricken accents -'gwayoutofit'!


This was quite a different piece to The Glass and whilst it lacked the narrative breath and ensemble synergy and fun of his earlier work,  in Liz and Lar  Barry balanced the poignancy of Lar's plight in the first half with the great humour in the second. What will Lar do next?

A very entertaining evening of local, new and amateur drama. The  production deserves great support. It runs till September 29th

Venue note: as ever excellent staff and volunteers at Garter Lane and how nice to offer a complementary pre-theatre drink to all.

Posted by Cathy Desmond at 1:02 PM