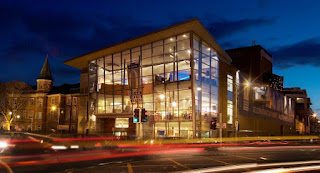 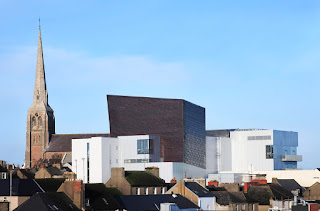 I penned this article last November. It didn't find a print slot and I am posting  it  now as yesterday I met some of the team involved in the Cork Operatic Society for a feature in the Irish Examiner. I regret to hear that no arts council funding has been forthcoming making their situation very precarious.

I spent two nights at Wexford Opera Festival in October and my reviews on Koanga and Guglielmo Ratcliff appeared in the Irish Examiner. The pews were full and there was a buzz of anticipation among the  seasoned cognoscenti, from home and abroad gathered at the opera house on opening night for the annual exhumation of neglected operatic repertoire.  So why did I feel a sense of disquiet.
It is a year since I was in the house for the announcement of the renaming of the house as National Opera House. Amid the cheering, there were some raised eyebrows. Just how was that going to work in practice, some asked. Would touring companies  use the Wexford House  as a rehearsal base before embarking on tours. It didn't seem plausible that there would be more than occasional performances outside the festival period. In theory, it's all very well to designate a national opera theatre outside the capital but to site it in a small town in a coastal corner was surely going to pose some logistical challenges. And what of the Wexford brand which prides itself on avoiding the mainstream which would surely be part of the remit of a national centre..
Michael Dervan addrsses the issue in a piece in the Irish Times last week. http://www.irishtimes.com/culture/music/the-peculiar-situation-of-a-national-opera-house-in-wexford-1.2407555. Dervan makes the point that you  would expect a national centre for any art form to reflect something of the national scene. He gets a hammering in the comments for having the audacity to suggest as much. Wexford Festival Opera presents very high quality productions with a superb chorus and voices. While there are valuable opportunities for young singers in training in the excellent chorus,  it does looks overseas for it's expertise. Irish singers were thin on the ground  in anything other than chorus and minor roles this year and production teams of the two operas I attended came from South Africa and Italy. Although it does occasionally programme new works, Irish composers have not yet featured.  Jurgen Simpson and Donnacadh Dennehy both had new works performed in major houses in London and Canada this year. Neither were performed yet at the NOH.  To the best of my knowledge , the only Irish work performed at the house was Eric Sweeney’s chamber work The Invader. Looking at the programme for 2016, the opera cupboard is pretty bare with just two  touring production s  scheduled for a one night each by Opera Theatre  Co and Wide Open Opera before the October Festival.

But surely the house would make a great local resource  you might argue. The house along with many other purpose built arts centres with high running costs is simply too expensive to make it feasible for local community groups unless they have a guaranteed sell out. Last year I traveled to Wexford to hear an exciting new symphonic work played by the excellent community ensemble, Wexford Sinfonia, The  National Opera House was dark that night and the gala occasion  took place in the not- at- all suitable County Council offices which are most inconveniently located several kilometres out of town. It was simply too expensive to open the doors of the salubrious house. This situation is replicated around the country as rates in our purpose built arts centres are simply too high to make it feasible for local societies to use them on more than an occasional basis. No longer will every school child in Waterford experience the thrill of threading the boards in the Theatre Royal as the annual Féile na Scoile now takes place in a school hall as increased hire costs are beyond the resources of school boards.
In the hoopla around the renaming of Wexford Opera House, there were extravagant claims about the house being the only purpose built house in the country. Now where had I read that before? A search of the Cork Opera House website suggested  that the Leeside venue was also purpose built for the requirements of opera.  With a lively local opera society mounting a run of successful innovative productions,  both in the Opera House and the Everyman Palace Theatre, there was an argument for siting a designated opera house in the second city.  But despite rave reviews and a string of innovative productions involving local and international artists and crew , there is no staged production scheduled for 2016  by the Cork Operatic society  due  to a lack of funding.  Composer and director of Cork Operatic Society,  John  O Brien’s new work based on an Oscar Wilde short story, The Nightingale and the Rose will have to wait for a new round  in 2017* for a chance of Arts Council funds . There will be some opera in Cork however as an Opera Theatre Co touring productions of Don Giovanni will play here. Cork opera  practitioners would by remarkable if they didn’t view the generous grants for  three productions by Opera Theatre Company and Wide Open Opera’s ventures with a degree of envy  particularly with both companies under the helm of the same director.

Cork Opera House in collaboration with Cork Operatic Society are doing the best to keep the opera flame burning in Cork with two concert performances of La Traviata and The Merry Widow featuring sopranos Majella Cullagh and Cara O Sullivan in the title roles. Without regular funding  it is very difficult to keep it going. It is difficult to know what else opera practitioners in  Cork could have done to merit support from the Arts Council for their efforts.

Posted by Cathy Desmond at 5:48 PM