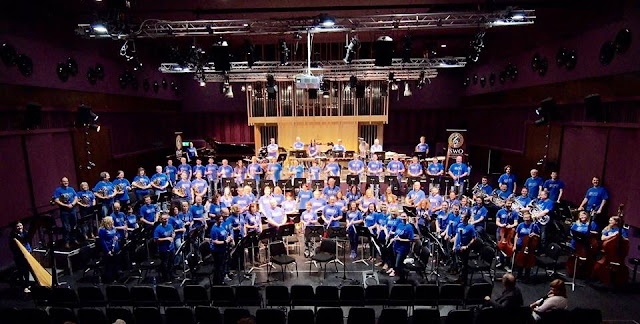 A perfect storm of music making blew up when a consortium of musical forces collided on the Ring Road in Waterford last night. The Irish Symphonic Wind Orchestra were united with the composer who was the catalyst for their genesis. Under the auspices of Symphony Club of Waterford, the ISWO togther with the Irish Youth Wind Ensemble under guest Johan de Meij, Liam Daly and Ronan O Reilly gathered to perform in the gigantic new WIT Arena  at Cariganore in Waterford, the first musical event to take place there.  It is difficult to think of any other indoor venue that could have accommodated the 150 musicians.

The ISWO evolved from the IYWE and was  formed in 2014 with the purpose of performing the Lord of the Rings Symphony, a much admired work by Johan de Meoj. I recognised many familiar faces, many from teaching establishments and brass bands around the country. The programme opened with a ceremonial fanfare and included Hobbits- from The Lord of the Rings. A piece titled Extreme Beethoven included references to all the Beethoven symphonies and  added an element of choreography with a marching band in counterpoint to the main ensemble. At Kitty O Shea's featured a medley of familiar Irish airs and was named for the bar in the Chicago Hilton where band delegates gather after the annual band convention.

The next gathering will be in Killarney. One senses that wherever the ISWo gather they will have a blast.