I pressed 'publish' a little prematurely yesterday. I am republishing with some additional comments regarding inequity in  public funding for arts in South Eastern counties. 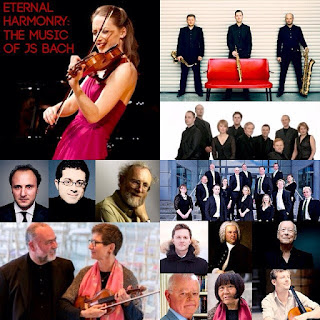 I spent two days at Kilkenny Arts Festival last weekend. My reviews appeared in the Irish Examiner last week . You can read my review of Opera Theatre Company's production of a pair of short works here . I love the welcoming atmosphere in the Watergate Theatre with it's cheerful cafe and Cleere's Bar across the road. There was a lot of love in St Canice's for the return of French Baroque specialists but  I was a little underwhelmed with headliners Les Arts Florissants. You can read that review here .

The nature of the programming was a subject of some debate this year.  On the ground, I did hear grumbles about the  worthy high brow nature of much of the festival fare. The lack of variety with an  emphasis on the music of one composer, JS Bach came in for some criticism. with not one but three sets of Goldberg Variations. High ticket prices  and the scaling back of the art exhibition element were other negatives that came up in conversations.
No question, the festival team  brought an almost bewildering selection of luminaries to the city . The festival was clear in it's direction and didn't try to be all things to all festival goers or to please a broad range of palates. For me though, it lacked an element of fun. Walking around the streets, there wasn't a sense of a town en fete. On Sunday afternoon,  Kilkenny natives seemed to have decamped en masse to Croke Park for the semi final clash with Waterford and a sound that fills me with dread drifted down Main St- the wheezing of amplified Peruvian pan pipes pervaded the eerie Sunday afternoon hush.

Amendment:  The main funder of the Kilkenny Arts Festival is the Arts Council which put up €390,000 for this years' festival. Neighbouring county, Waterford also mounts a 10 day  multifaceted arts festival. This year, the Arts Council withdrew it's meagre funding (€11,000 in 2014) for the Waterford's  Imagine Festival.  The fesyival  held on the cusp of Winter with a mix of all sorts of events draws in at least as many local punters as Kilkenny does.. As a regular attender of ImagineFest, I find such striking inequity in funding hard to fathom. Read what chairman, Nick Bankes had to say in this piece from the Irish Times here http://www.irishtimes.com/news/ireland/irish-news/waterford-s-imagine-arts-festival-has-funding-cut-by-arts-council-1.2219448.

Councillor Mary Roche also voices some concern. The Waterford independent councillor carried out an exercise on Arts council  funding streams comparing funding for arts in Waterford with Wexford , Galway and Limerick. Again, the inequity striking and a cause for ennui for anyone involved in the arts in Waterford.. http://cllrmaryroche.blogspot.com/2014/08/demise-of-red-kettle-theatre-company.html

Press Notes :The Irish Times coverage included no  less than three whimsical pieces by Arminta Wallace in the Irish Times over the course of the 10 days in addition to Michael Dervan's reviews.
http://www.irishtimes.com/culture/kilkenny-arts-festival-fast-fun-and-unpredictable-1.2311696

Next year's festival is due to focus on the work of Mozart.