Navigating the Fringe at Edinburgh: Supertown 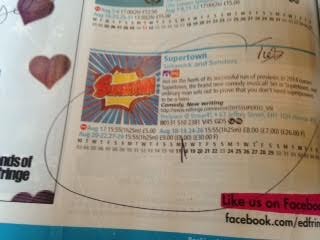 I am in Edinburgh on my first visit to Scotland drawn by the magnetic pull of the month long extravaganza of high class arts festival and sprawling fringe which sees hundreds of pop up theatre spaces all over the city. Having skimmed through  the programme, a weighty tome about the size of a telephone directory, I decide to leave it to chance and  set off through damp streets to get my bearings and sample the Edinburgh fringe.  Just down the road from my hotel is venue 45, a church hall which seems to have a respectable queue forming. A musical?- with more than one person?- that'll do nicely Anxious to lose my festival neophyte status as quickly as possible, I buy a ticket and thus stumble on Supertown. 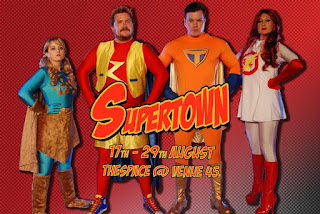 Supertown is a new  musical by the delightfully named team of , Sidgwick and Sanders - It is bright and breezy spoof based on superhero comic genre presented by members of LIDOS, which appears to be a company drawn from Insurance industry folk based in Leeds. Supertown is peopled with superheroes,  soft centred villains and ordinary people, -crawlers. One geeky guy sets out to prove that the town's favourite Superhero is not all that he seems and the moral of the story is that you don't need superpowers to be a superhero.  A company of generous proportions of over a dozen sing and dance with panache. A trio of Susan Boyles and a Jamiacan Bob Sled quartet are among the hilarious cameos. It is  fast paced, witty and funny. The tunes are catchy, the arrangements slick. I note later that the librettist, Sigwick plays the role of slovenly superhero, Zapper in a style that reminds me of Hugh Fearnely Whittingstall.

Later,I catch a comedy benefit night at the magnificent Assembly Rooms which has the advantage of hearing a half a dozen or so comics in the space of an hour or so which is plenty. I don't really like that style of improvised comedy that riffs on front row audience members but I have to admit that Jason Byrne did get the crowd going.  Scottish comedian,  Fred McAuley and the quirky  Paul Foot appealed most to me of group.

Finally a nightcap in Whiski,, a terrific bar where a table of musicians sent strathspreys and airs into the mellow evening air

Now whatever to choose tomorrow.

Posted by Cathy Desmond at 8:58 AM