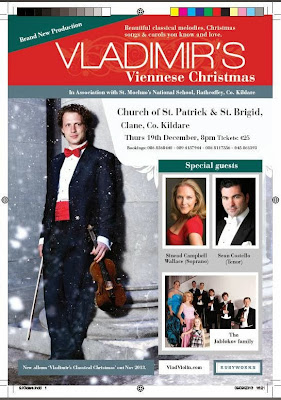 It is quite a feat  for visiting artists who are not  household names to respectably fill any but the smallest venues in  Irish towns and cities on a midweek night and it was good to see the Theatre Royal, Waterford  packed to capacity on Tuesday night. The draw was Slovakian violin virtuoso, Vladimir Jablokov who brought his travelling Viennese Christmas extravaganza to Waterford for fourth  consecutive year. Accompanied by an ensemble including  family members with soloists, soprano Claudia Boyle and  tenor, Sean Costello, the fare was  light  and sparkling- musical miniatures with seasonal carols and popular standards. 'I hope you heard what you expected to hear tonight' said the dynamic polka prince clad in proper concert meister attire-natty tails and shiny shoes. Judging by the  reponse, the formula of musical pops laced with down home folksy charm- a whiff of the Waltons tempered with the spirit of the von Trapps -, went down a treat with this  audience, most of whom were repeat attendees.

The programme was book ended with Viennese marches and interspersed with polkas and waltzes. The vocal element opened with a duet -Vienna, City of my Dreams, familiar from the recordings of Richard Tauber. There was a nod to more modern repertoire in a 20th century carol, The Road to Bethlehem by British composer Michael Head and the Irish tradition was represented by the Wexford Carol both beautifully delivered  by rising international star Claudia Boyle. I was surprised to see microphones set up as had the doors been open, both singers could have been heard on the Quay without the aid of amplification.

The audience weren't slow to join in with waltzes by Lehar, Kalman and Strauss. This is after all the city that hosted an international light opera festival for many years. I couldn't help but feel nostalgic for the decade in my lifetime when Viennese  operettas were  much in vogue and a string quartet was the norm in the pit band. Indeed, I cut my  musical teeth on this repertoire and enjoyed many nights of vamping along to schmaltzy waltzes for local musical societies  in this theatre.

The second half opened with a stringent pinch of Prokofiev and it was good to hear the viola  feature after all the high treble Strauss violin lines.  A minor criticism, is that generally, the arrangements did not fully exploit the cello and viola player and volume level on the electric piano were at times a little too heavy. Like a house  party, each family member did a turn. Olga Jablokov impressively tossed off a difficult piano part of a Disneyesque arrangement of Sleigh Ride as a mere trifle. The singers let their hair down with more popular repertoire and these consummate operatic artists proved their versatility adapting their style to suit the popular numbers. There were shades of Marilyn Monroe in  Claudia's delivery of Santa Baby' in an eye popping red dress and Sean would have given the 'Velvet Fog' a run for his money in his relaxed and easy  delivery of  Mel Tormé's Christmas song.

Terrific and all as the singers were, my highlights in the second half were the instrumental numbers. Patriarch, Alexander Jablokov played variations on a traditional Russian folksong. Vladimir and  brother Anton had a lot of fun with their jazzy improvised duet version of  Mariah Carey's pop hit, All I Want for Christmas. There was a pause for moments of serenity when Mother and son Andrew presented a duet arrangement of Schubert's Avé Maria.

In this period theatrical space there was a  sense of the charm of a Victorian music hall musical evening as Vladimir did a bit of circulating around the stalls to serenade individuals. It was old fashioned light  music entertainment done with skill and charm and the audience lapped it up.

Vladimir Jablokov is an excellent player but  he combines skill with an unabashed showmanship that is quite refreshing in a classical artist.  His collaborating artists clearly enjoy working with him. Moreover he appears to have an astute sense of the whole business of marketing and building an audience.  We also liked that the set list was available free of charge without having to buy a programme.  Catch him at his last gigs on this tour  in Enniskillen and Cork 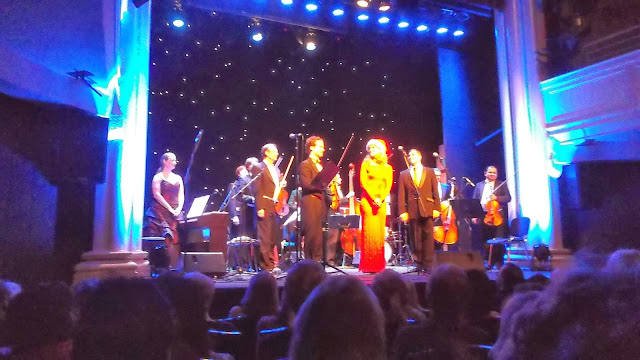 Posted by Cathy Desmond at 1:56 AM