Memories of a Summer Puccini Trail

With the year drawing to a close and highlights of the year lists appearing everywhere, I wanted to recall a couple of events that slipped through the blog net, before too many of the details recede into the fog of dimmed memories. In June, I traveled to Italy, stopping off in Saxony en route. Looking back over the week, it was the strains of Italian opera composer, Puccini that provided the soundtrack to this escapade with a visit to hear Manon Lescaut at Dresden Opera House and a trip to the composer's Tuscan birthplace, Lucca on the itinerary.

There  is a spot in the Berlin where Puccini rubs shoulders with Wagner and Guonod. The Deutsch Oper underground stop is lined with ceramic tiles bearing the names of opera composers. On to our base in Leipzig, from where  we took the train to  Dresden, a journey of little more than an hour for a day of sightseeing and a trip to the famous Opera House home to Semperoper. Given that Dresden had suffered such extensive bombing during the war, I  expected to find a modern city, with new architecture replacing old. A surprise then to find a cityscape magically restored to it's former Baroque splendour with  no visible cracks. No more so than in the emblematic Frauenkirche.  Extraordinary!  The elements had wreaked some havoc though and at the city quays, boats remained forlornly at their moorings cut off from their tourist passengers by high water levels.

Promo for Manon Lescaut from Semperoper


In the evening, we took our seats high up in the gods for a production of Puccini's Manon Lescaut. For a modest ticket price of €11.50, (secured on the day) I didn't expect much of a view but in fact it wasn't bad at all and it was perfect if (a) you are dressed not in glad rags but walking gear and (b) are prone to a little snooze after a heavy day of sightseeing. A-list conductor, Christian Thielemann directed. I include a link to a review that appeared in the online journal, Opera Critic, here.

Dresden boasted a superior class of busker with golden angels and excellent trumpeters adding colour to the scene. Undaunted by the enormous space, Arun was  pouring the strains of the Grand March from Aida into Neumarket.  It was a cheerful sight  'Ah Ireland-  he said when I paused to chat 'I came some years ago to play in  Wexford for the festival' said the young Armenian. a human face to all those press reports about wrangles between Wexford Festival and the Musicians Union 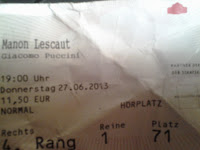 On to Italy via a cheap Ryanair flight, where we spent a few days in Viarregio, on the Tuscan Riviera. Sadly we were too early for the Puccini Festival held annually at Torre del Lago where the composer had a villa. In Lucca, the composer's birthplace, you can visit the elegant town house house he grew up in before taking in a recital at the 'never ending Puccini Festival'.  In a local initiative, Puccini e la sua Lucca, a rotating cycle of recital programmes is offered to a predominantly tourist audience. With lots of tourists in the region looking for some evening entertainment, this seems like a good  initiative- We heard
solid professional performers in a splendid baroque space, in a recital of the composer's arias interspersed with Neopolitan songs. I particularly enjoyed the solo piano fantasias on operas very well played by Diego Fiorino. It is probably stretching it though to brand it a festival which suggests a temporary extravaganza  rather than a year round nightly event.  Having come from enjoying the delights of a subsidised. full scale opera production for half the price, the tickets seemed pricey at €20 a ticket and we wouldn't have rushed back for a second night. Unfortunately the percussion sound effects of the box office counting their takings was distinctly audible at one point in the recital.

There are direct flights to nearby Pisa from Cork during the Summer and train connections from the airport to many towns in Tuscany including Lucca and Viareggio on the coast are  easy and very cheap. 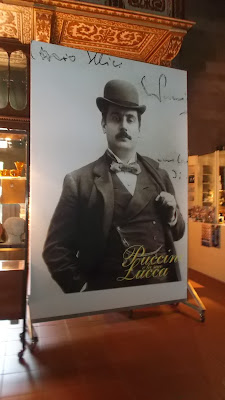 listen to ‘Busker plays the trumpet in Dresden’ on Audioboo