Xmas Shorts: A Night of New Plays in Waterford 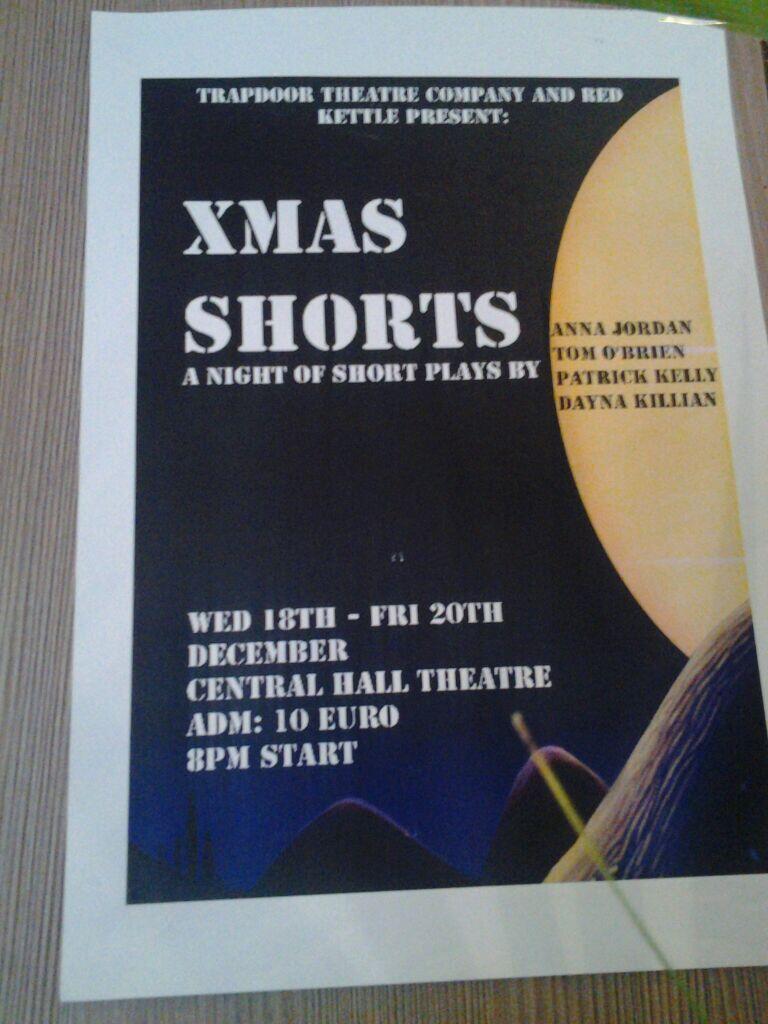 Just in from an interesting and entertaining evening of new theatrical writing . Titled Xmas Shorts, Trapdoor Theatre Company in association with Red Kettle TC presented five short plays by writers, Anna Jordan, Tom O Brien, Patrick Kelly and Dayna Killian.  at Central Hall Waterford. There was a relaxed collegial atmosphere in the small theatre with an audience of local thespians and friends in. Set design was simple but effective and a different projected image introduced prefaced each piece and acted as a backdrop for several.   I particularly liked the impressionist pub secene image for the Brendan Behan Standup, in which Damien McDonnell brought the curmudgeonly spirit of the playwright to life on stage through a text by Tom O Brien. The device of a penitential confessional scene was used to good effect here  and also in Dangers of Ignorance. Brian Coady had the audience in stitches in this comedy monologue by Anna Jordan. The evening     opened and closed with an ensemble piece. Emma was a dark Medea like tale featuring a real life mother and daughter. Isobel and Dayna Killian in the cast and the finale featured a set of siblings in contemplative mood as they packed up their childhood home.  Making up the set  was a two hander ghost story Marianne There was a resonating plot device with these two dramas also in the dramatic placing of a watch for characters  beyond the grave .
With revivals and classics being the staple fare of the big professional companies, new writing has become the preserve of smaller companies and the am-dram scene and it was great to hear so much good writing delivered in a Waterford accent.

Quibbles . It is hard to read programme notes that are both in CAPITALS and in BOLD. I couldn't find any information on the event on line either on the Red Kettle Theatre Company website  or Trapdoors Blogspot. Surely the event merited a paragraph or two on the company website.

Xmas Shorts continues nightly at 8pm at the Central Hall, The Quay, Waterford