Guest Blogger: John Hartery
On Saturday at the Imagine Festival there was a screening of the film about the Bunmahon copper miners. The movie is a community endeavour. The outcome  of a project involving the Copper Coast organisation and the residents of the coastal village.

The mining industry in Bunmahon lasted from the 1840's till the latter part of that century. Workers climbed down ladders and out under the sea bed and mined dreadful conditions. Women and children were also employed to break up the mined rock to extract the ore. The finished product was carried away on schooners to smelting works in Wales. The mines of Bunmahon are an important part of our history and the film gives us a a vital insight into the lives of our Déise forefathers 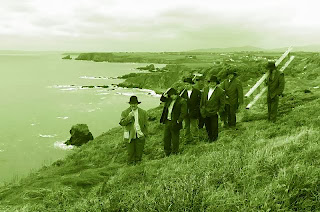 Tina Keating from the Copper Coast Geopark outlined the social conditions prevalent during the mining period. The village swelled to a population of over 3,000 during production. Afterwards, many miners migrated to Montana and mined there.
Sean Corcoran and Angela Mulcahy who made  the movie were on hand to describe how it was shot.
It's a short film of approximately 15 minutes and will be of interest to social and local historians and those in the education sector. A further 5 or 6 shorter documentary pieces accompany the main work.
Further details of the movie can be found here . It can be seen again at the Waterford Film Festival on 9th November
JH

Posted by Cathy Desmond at 9:35 PM