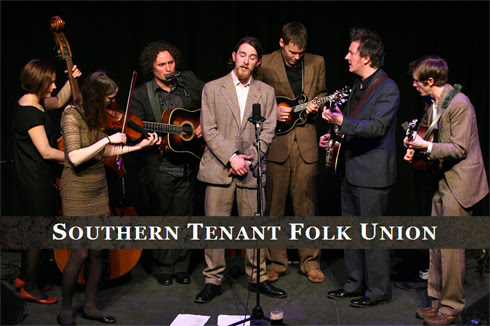 Southern Tenant Union Folk are  back in Ireland for  a hectic week long tour.  Above is the Scottish ensemble's appearance on the Late Late Show, that made me sit up and pay attention. I saw them last night at Christchurch Cathedral, Waterford.

The six gentlemen dressed smartly  in suits made an impressive tableau gathered around a retro style microphone. The sound was an inventive  blend of  bluegrass with other styles.  20th century film music is cited as an influence and there is a strong seam of Cuban roots music in there too. The playing is highly accomplished and the vocal blend is satisfying. The songs are intelligent, thoughtful, tending to the dark side,  many with a  political edge.  'If we only sing songs about whiskey and riding box-cars, we're finished said chef d'équipe , Pat McGarvey. You can hear his interview on the Andrew Marr show below.

At the close  the band abandoned their altar position and moved to stand and sing among the pews. It was thrilling somehow to hear musicians without the veneer of amplification however subtle. Given that audiences for live music in Waterford are sometimes less than 50, maybe we could have a little more wireless performance practice.

I am not sure whether it was the acoustic or the Scottish accents, or the amplification, but I struggled to catch the spoken introductions.   But I am very glad to have seen them. It cannot be easy travelling the length and breadth of Ireland on the darkest days of Winter.  If they were disheartened by the paucity of the attendance scattered in the pews, they didn't show it. They are brave to undertake it and worthy of our support. Tour dates are below.


Venue Notes : Christchurch is a very  elegant 18th century ecclesiastical space. With the organ pipes gleaming under the bright lights of crystal chandeliers, it didn't seem quite an appropriate setting for the style of performance, even when as well executed as it was last night. PR seemed minimal . I couldn't find a reference in local press and I learned of the gig from a poster  in a local café.