Happy Blues at the Mill Bar with Ottley and Friends 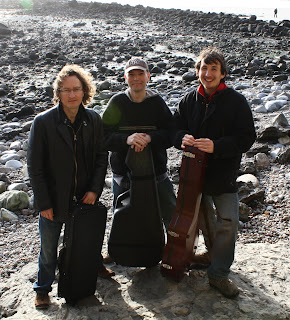 There was  kind of hush as we stepped into The Mill Bar in Sixmilebridge, as if the audience didn't want to miss one note of the opening Gillian Welch song  from a quartet featuring  the 2012 Tennessee fiddle champion. Ivor Ottley was joined by Galway based musicians Tom Portman on dobro guitar, Paddy Jordan on double bass and Pete Lamb guitar and vocals. This was not a fast paced hard, driving traditional bluegrass set  but rather a mellow mélange of styles with elements of country, swing , jazz  and trad. There was plenty of  toe tapping stuff with Fisher's Hornpipe a highlight near the close. But it was the  languid waltzes that were most winning with Lamb's simply delivered vocals allowing dobro and fiddle to weave some melodic magic in the spaces. 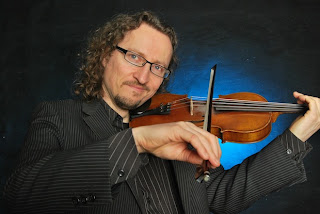 Ottley is extraordinary -a very clean and elegant  fiddle style with a varied arsenal of left hand and bowing techniques that adds a depth and colour to his playing . While quite the virtuoso and  adept at improvising,  his variations are never indulgent and thankfully never stray too far from the original melody. His version of  Ashokan Farewell was rather more interesting than Ungar's relatively straight version.  His versatility was perhaps best demonstrated by his  rendition of a solo air delivered in a simple style, with vibrato reigned in for more haunting effect

An  ambiance  of collegiality radiated from the stage and the audience responded less with whoops and hollers but  more with concentrated listening ears .  The venue, a  large square timbered room with nice high ceiling and a huge stove with a welcoming real fire was very comfortable.

I spoke to Ottley following the gig and he told me something of his fascinating journey and his admiration for the playing of Grapelli,  Oistrakh and Milstein and the tale of serendipity that led an Englishman to be the Tennessee Champion.  The story is covered in this post from the  Bluegrass  Ireland  blog (link  here)  I was surprised to learn that he was a frequent visitor to Feakle sessions and was in fact resident in Ireland for many years. (Fiddle players should check out his website for some great tips).  Ottley is now happily ensconced in the Swedish jazz scene and opportunities to hear him on these shores are rare .

**The trio Gone to Grass with members Paddy Jordan, Tom Portman and Pete Lamb will play at Green's Pub, Kinvara as part of the Turkey Fleadh on December 30th  4.30pm

** Please note this is a correction on the information originally posted .