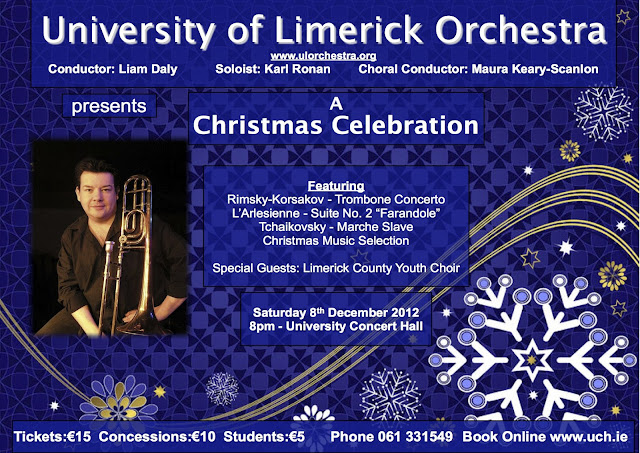 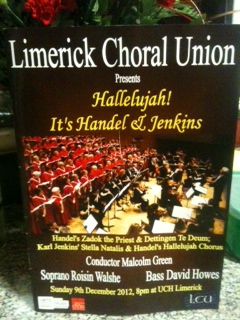 Two Limerick community ensembles presented their seasonal  musical offerings at UCH this weekend .  On Saturday night the University of Limerick Orchestra welcomed  trombone player Karl Ronan who shone  in an  an attractive concerto by Rimsky Korsakov.  There was a sense of camaraderie between the soloist and conductor, both former members of the Artane Boys  Band. Conductor  Liam Daly was a  authoritative presence on the podium and drew a disciplined performance from the orchestra. There were no ragged edges as a sense of unity prevailed across all sections. Neither was there any paring down in any section with symphony proportions of wind and brass and a full complement of percussion added sparkle to the programme. After the interval, Limerick Youth Choir performed a short set of  Carol of the Bells , a Russian Hymn and a brace of Julie Feeney numbers before the concert concluded with popular Christmas repertoire.


On Sunday night, Limerick Choral Union presented a blend of Baroque and contempory in a programme of  two of their bread and butter composers. LCU provides a great platform for young rising stars and the soloist in Handel's Dettingen Te Deum was bass, David Howes, one of three  generations of Howes singing with this community choir on this occasion  Soprano,  Roisin Walshe was soloist in Jenkins seasonal cantata Stella Natalis, a very attractive work with Jenkin's trademark mix of ethnic percussion, odd metres and glorious melodies. Lee Butler's jazz infused solo trumpet was thrilling. The composer himself describes the distinctive elements in the video below. A splendid pair of trumpets  (Rick Cowen and Niall O'Sullivan) struck the key celebratory note in the Handel, Te Deum composed in a spirit of  rejoicing and jubilation in a British victory over a French Army at the Battle of Dettingen. Bravo to both LCU and ULO for a suitably festive and joyous weekend of music making  in Limerick.  I enjoyed both events, the first from a seat in the stalls and the second as a player. Plans have been announced for a joint Prom Concert  between both these community ensembles. Mark 11th May in your diary. It promises to be 'only heavenly music'