'The Queen of Connemara': A Tribute to Delia Murphy 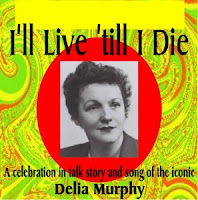 'Without Delia Murphy , there would have been no Christy Moore' was the claim made by actress and writer Carmen Cullen in her tribute act to her aunt Delia Murphy , one of Irelands best loved singers and song collectors at Glór this afternoon. The event  was part of the Bealtaine Festival as a guest of Clare Arts Office.  Decades before the Clancy Brothers , Delia Murphy popularised many Irish Folk Songs bringing them to the attention of international audiences giving them a respectability at home . And what pearls were the songs she unearthed, so simple and charming that once heard they are never forgotton.  Standard party piece favourites for my parents' generation, they are ingrained in our subconscious.  The show was a mix of songs , illustrated lecture with a  slide show of old photographs with the songs delivered by Mairín O Donovan with a great degree of charm accompanied by Gerry Anderson on guitar. Carmen also read from her soon to be published biographical novel, Two Sisters Singing using a simple prop of an on stage wind up gramaphone to evoke a past era. (Carmen's mother and Delia were sisters)  Opening with The Queen of Connemara, included in the set list Courtin' in the Kitchen, The Spinning Wheel Song, The Connemara Cradle Song, Three Lovely Lassies , Down By the Glenside, Thank You Ma'am Says Dan , If I were a Blackbird and of course The Moonshiner from which the delightfully assonant title for the show, I'll Live Till I Die is taken .
There was a sizeable enthusiastic audience including many residents of Carigoran House, several of whom took to the stage to sing a couple of songs themselves before departing.  Musician and entertainer,  Nigel Bridge, County Librarian , Helen Walsh  and Clare Arts Officer, Siobhan Mulcahy were also among the gathering.


This was a delightful afternoon of entertainment  setting in context  the contribution of this colourful and important artist.


Oh if I was a blackbird, could whistle and sing I'd follow the vessel my true love sails in And in the top rigging I would there build my nest And I'd flutter my wings o'er her lily-white breast