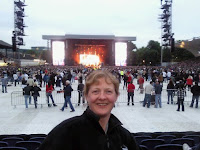 Just back in Ennis after the pilgrimage to hear one of the legends of popular music perform at the RDS.
McCartney appeared on stage around 8.30 looking trim and dapper. I had some misgivings about the venue and they were soon realised with quite a significant time delay between the lips and sound arriving at back of arena detracting a little from the feel of the live gig. It was some consolation that the celeb balcony bearing Tubridy et al was at the same remove.
McCartney opened with some Wings numbers proving he could rock with the best of them but I suspect many of the concert goers breathed a sigh of relief when he sat at the piano for The Long and Winding Road. While you couldn't but admire his staying power and effort, one couldn't ignore that some of the songs were very banal, worthy of Eurovision entry even and yes Paul we know you can lep up and down, but that doesn't mean you have to. The audience noticeably warmed up with a charming version of George Harrison's 'Something in the Way She Moved' Paul accompanying himself on ukelele.
The pyrotechnics for Live and Let Die although anticipated, were impressive .
On the way out we spotted PeterMcMenamin General Sec TUI singing away to Yesterday. Lets hope he wasn't thinking of the Croke Park agreement.
There was time for a post show nightcap with my friend and former colleague Pat Morris before boarding the excellent Kavanagh's Midnight bus to the West.
Posted by Cathy Desmond at 5:17 AM