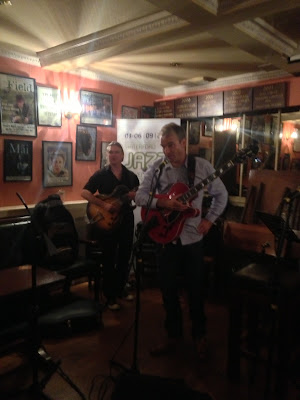 There has been much handwringing over the economic woes of Waterford, the closure of the Glass Factory and the Red Kettle Theatre Co pointed as markers of a deeper malaise expressed in articles like Kathy' Sheridan's 'Unsunny South East' in the Irish Times. While the city centre can lack the vibrancy of other urban centres, there is no better location for a festival. We salute the efforts of individuals and groups  that get off their backsides and make things happen . While we love to travel, the best events are those we experience at home. Spraoi continues to offer the most inclusive, accessible fun filled weekend to suit all ages. Claire Lynch were the classiest bluegrass heard at Dunmore East Bluegrass Festival.  Imagine Festival will brighten the early days of Winter. I was encouraged to see a new initiative announced in 2014. Building on a launch in 2014, Waterford Jazz Weekender recently launched a second mini-festival devoted to the jazz genre.

Spearheaded by Phill Collins, (note two l's), a jazz pianist on the staff at WIT, the weekend schedule offered a mix of styles and gigs, most of which were free.  The signature event was a mellow evening with the veteran guitarist, Louis Stewart accompanied by Cork saxophonist Len McCarthy and guitarist Stephen O Keeffe. It was guitar night at the Munster Bar as guitar duo Dylan Bible and Orm Kenny played a set before the main event. While there was a suitable hush at the Munster, Jane O Brien Moran and trio fought a losing battle at Katty Barry's with a yappy Friday night crowd.

Paris Swing brought a whiff of Parisian Boulevards to Bailey's New St where played a mellow open air gig  . I love the Cafe Orchestra style line up violin and accordion with bass and guitar. I was only sorry that I hadn't worn my dancing shoes as there was a bit of waltzing in the forecourt of the French Church.

It was good to see the Jazz Weekender link in with other initiatives . The Dublin City Jazz Orchestra came under aegis of Symphony Club of Waterford. While they lacked  a certain glam factor, they made up for it in sax appeal. Good to see local lads, Brendan Doyle and Gavin Roche among the ensemble.

Cork vocalist, Laoise Hanlon accompanied by Phill Collins rounded the procedings off in fine style on Sunday night at the Munster Bar.

Posted by Cathy Desmond at 5:12 AM