I spent a lovely day yesterday at the New Ross Piano Festival. My preview of the event appeared in Thursday's Irish Examiner The riverside town was blessed with Autumnal sunshine as patrons and performers congregated in the picturesque  St Mary's Church for two daytime events on the closing day.

To say Daria van den Bercken is a Handel entusiast is an understatement.It's bit like saying Rory McIlroy likes to play golf.  A trawl of her youtube videos shows her inveigling  passers-by to her appartmemt for impromptu recitals and literally taking to the air for a spot of extreme piano playing in her mission to spread Handelian vibes. You might expect that the Baroque master's work to be a bit dry and dusty. Not in Daria's hands. At a mid-day solo recital, the Dutch virtuoso imbued the Baroque master's work with such colour and feeling that was enthralling. There was charming Mozart too with a quirky Rondo a la Turca and a new piece bt Deirde Gribbin 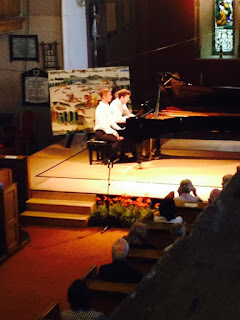 The afternoon concert was a satisfying three course  banquet-a  shared effort .  The Fidelio Trio brought a stringy starter of Beethoven. There were dazzling Russian fireworks from Ukrainian pianist Alexei Grynyuk. Then onto a  generous dessert of all 21 of Brahms Hungarian Dances (which were originally written for 4 hands, the comprehensive notes informed us) performed-y Finghin Collins and Cedric Tiberghien. Who  doesn't like to sit down and eat a whole bag of bon bons occasionally. I don't think I've heard more than a handful of the most popular ones before.


We send a final burst of virtual applause to artistic director, Finghin Collins and the hard working team who put it all together and pull it off with such aplomb. It is a remarkable  achievement to keep this niche festival going off the beaten track with  such a consistently high calibre of performers into a tenth year. What is partcularly  pleasant is the sense of prevailing convivilality. It feels like a rather elegant house party as performers sit front of house to hear fellow artists and  Collins,administrator  Connie Tantrum with  fellow committee members mingle to greet patrons.
As a final blessing, a  magnificent amber moon glow beamed down as I drove home  adding a lttle extra sparkle to the close of a delightful day. 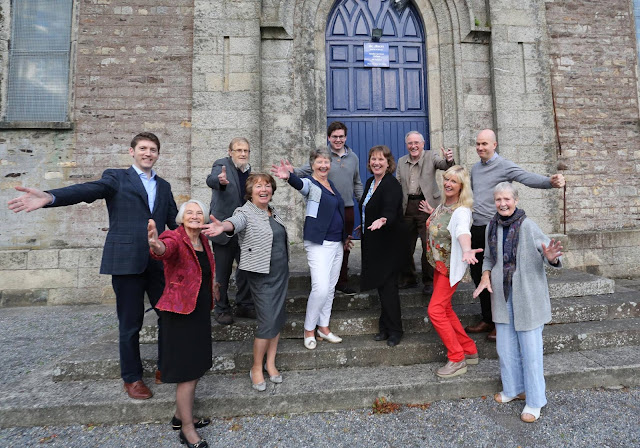